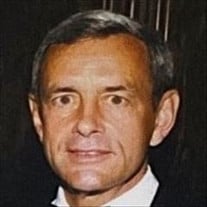 Frederick James "Fred" Donnelly passed away on May 11, 2020. He was born on October 11, 1939 to Elizabeth Galinak Donnelly and Andrew James Donnelly in Passaic, New Jersey. Fred was Cedar Grove, NJ valedictorian in 1957 and went on to attend Lehigh University where he won three varsity letters in lacrosse and one in ice hockey. In 1961, he graduated with honors from the Arts College with a BA-Applied Science. In 1962, he was inducted into Chi Epsilon (Civil Engineering honorary) and received a BS-CE from Lehigh College of Engineering. Fred joined Bethlehem Steel Company's Loop management trainee program. He built bridges for Bethlehem in Indiana and Illinois and began the University of Chicago's Graduate School of Business as a night student. In 1966, he was offered a full scholarship for the daytime program, leading to an MBA in 1967. Concurrently, Fred passed three days of exams and became a licensed, professional structural engineer. On June 18, 1966, Fred married Veronica "Ronnie" Carroll in New York. Fred and Ronnie began their married life in Chicago. With his new MBA in hand, Fred accepted a job in New York with Esso Standard Eastern and he and Ronnie moved to Larchmont, NY. Fred and Ronnie's first child, Dennis was born in 1967, followed by siblings, Amy, Andrew, Sarah, Cathryn, and Meghan. Fred joined the Getty Oil Company in New York and moved to Tulsa, Oklahoma, in 1977, where he became Vice President, Chief Financial Officer and a Director of Getty Refining and Marketing Co. in Tulsa. While working in Tulsa, Fred served on the Boards of Boy Scouts of America, Monte Cassino School and Catholic Charities. When Texaco bought out Getty in 1984, Fred remained as Vice President of Finance and opted to commute to Houston, TX, which he did each week until his retirement in 1998. Throughout his career, Fred's work travels took him to various countries around the world including India, China, Pakistan, Malaysia, Thailand, Indonesia, Mexico, Egypt and many others. Always athletic, Fred began each day with a long run. He qualified and ran the Boston Marathon in 1972 and 1973. He ran the New York City Marathon twice and the Yonkers Marathon, encouraged by his young children - "run faster, Daddy!". In 1979, his running time of 2 hours 56 minutes won him first place in the Will Rogers Marathon in his over-40 age division. Fred was an adventurer. In 2000, Fred fulfilled a childhood dream by through-hiking the entire 2,160 mile Appalachian Trail from Spring Mountain, GA to Mt. Katahdin, ME in 6 months. The following year he and another through-hiker drove from Tulsa to Alaska where they kayaked, hiked, and camped the back country. Fred enjoyed regaling family and friends with his outdoor adventures and tales of near-calamities. At age 75, Fred joined a small group of intrepid adventurers intent on summiting Mt. Kilamanjaro, Tanzania, to raise awareness of Parkinson's Disease. The trip was successful, complete with a rugged descent assistance from local porters. At the time of his death, Fred was optimistically planning a Grand Canyon river rafting trip with his youngest daughter and her husband. A literary man, Fred delighted by occasionally reciting poems from memory by poets such as W.B. Yeats and Robert Service. Fred spent many years of his life studying a vast array of subjects in depth including philosophy, religion, mathematics, physics and astronomy. He is remembered fondly for his wide knowledge on many subjects, his determination, intelligence and wit. Fred was predeceased by his parents and brothers, Dennis and Brian Donnelly. Fred is survived by his wife, Ronnie and their children, Dennis, Amy, Andrew (Jennifer), Sarah Moncada (Ed) of Los Angeles, Cathryn, Meghan Fredet (Thomas) of Kauai, HI; and his beloved grandchildren, Emma, Liam, Ava and Connor Donnelly. Donations in Fred's name can be made to Cascia Hall, San Miguel School, Smile Train, Doctors Without Borders. Fitzgerald Ivy Chapel, 918-585-1151

Frederick James "Fred" Donnelly passed away on May 11, 2020. He was born on October 11, 1939 to Elizabeth Galinak Donnelly and Andrew James Donnelly in Passaic, New Jersey. Fred was Cedar Grove, NJ valedictorian in 1957 and went on to attend... View Obituary & Service Information

The family of Frederick James Donnelly created this Life Tributes page to make it easy to share your memories.

Send flowers to the Donnelly family.