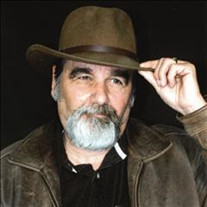 Gary Vincent Bruno came to rest on August 24, 2021, at the age of 66, in the comfort of his beloved home with his family by his side. Gary was born on September 17, 1954, in Wichita Falls, TX to father Leonard "Sonny" Bruno and mother Nelita Bruno. Only 11 months later came Angie Bruno, his favorite little sister. After living in England for a short time during his fathers' deployment, the family eventually settled in Tulsa, OK. Gary attended St. Xavier and Peary Elementary Schools, and Foster Junior High School. Gary graduated from East Central High School in 1972 and soon after married his high school sweetheart Robin Gail Abernathy in 1973. They welcomed two children: Mandy Jo in 1975 and Coby Vincent in 1977. Gary started working for the United States Postal Service in 1982 and retired in August of 2020 after 38 years of service. Anyone who knew Gary would surely attest to his fantastic sense of humor and his kind and gentle nature. He was a loyal friend to many and truly cherished the lifelong relationships he shared with a few he considered more family than friends. Gary's most favorite place was his home and land. Fishing in his pond with his two grandsons, Dalton and Caden, taking hikes on his property, listening to great music on vinyl with his best friend of 55+ years Steve Shook, and taking road trips with his wife Robin were the things that Gary most enjoyed in life. Gary had an unbreakable bond with his sister Angie and was an amazing example of a father and provider to his children. Gary was preceded in death by his parents. He is survived by his wife of 48 years, Robin Bruno; Children- Mandy Clifton and husband Steve Clifton, Coby Bruno; Sister- Angie Bruno; Grandchildren- Dalton Clifton and wife Randi Clifton, Caden Bruno; Nephews- Christopher Thornton, and Travis Thornton. Please join us for a Celebration of Life on Tuesday, September 21, 2021, from 5:30 to 7:00 pm, at The View at Hillside Barn, 13501 W. 146th Street South, Sapulpa, OK 74066. This will be a casual gathering to share your favorite stories and fondest memories of Gary. The family would like to extend a heartfelt thank you to all of those who sent cards, called, and prayed for Gary. We would also like to say how much we appreciate Seasons Hospice and all that they have done and continue to do for our family. Not Gone, Just Gone Ahead.

Gary Vincent Bruno came to rest on August 24, 2021, at the age of 66, in the comfort of his beloved home with his family by his side. Gary was born on September 17, 1954, in Wichita Falls, TX to father Leonard "Sonny" Bruno and mother Nelita... View Obituary & Service Information

The family of Gary Vincent Bruno created this Life Tributes page to make it easy to share your memories.

Send flowers to the Bruno family.