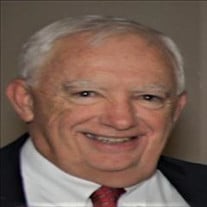 On Tuesday, April 21, 2020 at 4:23 pm, Gary R. Christopher, peacefully passed from his life here on earth to his eternal life in heaven after battling Multiple Myeloma for five years. Gary was born in Waynesville, Missouri on November 11, 1949 to Ray and May Christopher. He was raised in Rolla, Missouri where he graduated from high school in 1967. He went on to continue his education at the University of Missouri-Rolla graduating with a B.S. in Petroleum Engineering. While in college, he married the love of his life, Regina. They celebrated 50 years of marriage this past December. After graduation they moved to west Texas where he started his many years in the Oil and Gas Industry. Wanting to be closer to their Missouri families, he accepted a job offer in Tulsa in October 1975. Since moving to Tulsa, he has worked in the oil industry and also spent time as an oil and gas lender at First National Bank and Bank of Oklahoma where he became the head of that department before eventually leaving to return to the industry at Kaiser-Francis Oil Company until retiring in 2004. After a short retirement, he began consulting work for many independent oil companies and banks. He began serving on the boards of Summit Bank, now Commerce Bank, and Unit Corporation. Gary is survived by his wife, Regina, a daughter, Michelle Eason, a son, Colin Christopher and wife, Alicia, 3 grandchildren, Caidence Christopher, Parker and Luke Eason and extended family, as well as a host of friends. All of which will miss him dearly. Due to the present circumstances and restrictions, there can be no funeral at this time. Only a small, private family visitation has been planned under the direction of Fitzgerald Southwood Colonial Chapel with burial at Calvary Cemetery in Tulsa. A memorial and celebration of life may be held at a later day. RIP Gary, you are deeply loved and respected and will be missed. In lieu of flowers, family wishes that donations could be made to the following organizations, in Memory of Gary Ray Christopher. Food for Kids Community Food Bank of Eastern Oklahoma, 1304 N. Kenosha Ave, Tulsa OK 74016 Meals on Wheels 12620 E. 31st Tulsa, Oklahoma, 64146

On Tuesday, April 21, 2020 at 4:23 pm, Gary R. Christopher, peacefully passed from his life here on earth to his eternal life in heaven after battling Multiple Myeloma for five years. Gary was born in Waynesville, Missouri on November 11,... View Obituary & Service Information

The family of Gary Ray Christopher created this Life Tributes page to make it easy to share your memories.

Send flowers to the Christopher family.