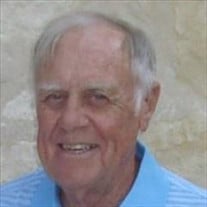 Gene "Bebs" Naumann, age 88, passed away on Wednesday, August 18th at his home surrounded by family. Gene was born in Columbia, IL on January 18, 1933, to Walter and Cora (Reichert) Naumann. He was the third oldest of 6 children, Robert, Durrell, Marlene, Don, and Shirley. He attended Columbia High School and trade schools in the Communications/Engineering fields. He served in the U.S. Army as a Supply Sergeant at Fort Hood in Killeen, TX as well as in the Illinois Army Reserves. The next chapter in his life began as Gene traded in his ski boat for an engagement ring, and married Carolyn Janson on October 15, 1960. He worked at WCBW radio as an announcer for local basketball games and was also a telephone lineman for the Harrison Telephone Company. In 1965, Gene, with a broken leg, and a pregnant Carolyn, built their first family home from the ground up. Gene continued to grow his communications career in St. Louis, successfully opened and grew the MCI - Tulsa Branch as the Operations Manager, and then wrapped up his working career as the Director of Facilities at Bishop Kelley High School. Gene was preceded in death by his parents, Walter and Cora (Reichert) Naumann, his brothers Robert and Durrell and sisters Marlene and Shirley. He is survived by his loving wife, Carolyn, of 60 years, sons Craig of Tulsa, Brad and his wife Wendy of Frisco, TX and daughter Megan Short of Tulsa, and brother Don of Columbia, IL. He adored his six grandchildren, Tate and Jude Naumann of Tulsa, Adam and Matthew Naumann of Frisco, TX, and Peyton and Hudson Short of Tulsa. Gene was an avid golfer, who in retirement played five days a week, and was most proud of his hole-in-one at Battle Creek Golf Club in 2007. Gene was a loving son, brother, husband, father, golf partner, and cherished friend. He loved traveling, playing/coaching/watching numerous sports, especially St. Louis Cardinals Baseball, the Bishop Kelley Comets, and any sport his grandchildren participated in. Picking winning horses in Hot Springs and telling corny jokes were two things he was known for. Gene was always willing to lend a helping hand to family and friends. He will always be remembered for his warm smile, gentle spirit, and kind heart. A rosary will be held at 7:00 p.m. on Sunday, August 22 at Fitzgerald Southwood Colonial Chapel. The funeral mass will be celebrated at 10:00 a.m., on Monday, August 23 at St. Pius X Church. In lieu of customary remembrances, the family requests with gratitude that memorial contributions be made to St. Pius X Endowment Fund https://spxtulsa.weshareonline.org/ws/opportunities/EndowmentFund or Eastern Oklahoma Catholic Charities https://cceok.org/donate

Gene "Bebs" Naumann, age 88, passed away on Wednesday, August 18th at his home surrounded by family. Gene was born in Columbia, IL on January 18, 1933, to Walter and Cora (Reichert) Naumann. He was the third oldest of 6 children, Robert,... View Obituary & Service Information

The family of Gene A. Naumann created this Life Tributes page to make it easy to share your memories.

Send flowers to the Naumann family.