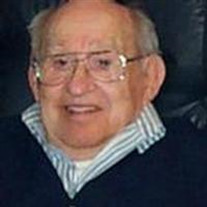 George Samuel Barzellone died peacefully early Monday morning November 2, 2009. George was born in Krebs, Oklahoma to parents Vito and Mary Barzellone. He graduated from McAlester High School (circa 1941) and attended Oklahoma University in 1941. He held the position of secretary, vice-president, and president of Pi Kappa Alpha and attended the College of Business Administration. After enlisting in the Army Air Corps on October 15, 1942, he was assigned to the 409th Bomb Group and participated in 2 campaigns as an aerial engineer aboard the aircraft, Douglas A-26 Invader, over Reinland, Ardennes, and Central European. By the end of the war, George was honorably discharged and received the European-African-Middle Eastern Campaign Medal, 3 Bronze Service Stars, Good Conduct Medal, WWII Victory Ribbon, American Theater Ribbon, and Distinguished Unit Badge of the 9th Air Force. Shortly after returning from WWII, he resumed his studies at the University of Oklahoma where he completed his Bachelor’s Degree and briefly attended the school of law. He joined SD Giacomo Company as a wholesale grocery representative in Sapulpa, OK in the late 1940’s. In 1950, he would meet his future wife, Mary Frances Foster, who was currently attending Benedictine Heights College. George and Mary Frances were living in a garage apartment in Sapulpa, OK when they gave birth to their first son, Stephen, in June of 1951. The new family moved into their first home in Sapulpa on Circle Drive and soon gave birth to their second son, Timothy in 1956. In 1963, George and Mary Frances became the proud parents of their first daughter, Michelle. Two short years’ later, they celebrated the birth of their fourth child, Susan. George and family moved to Tulsa in 1974 and became parishioners of St Mary’s Catholic Church. George continued to work in sales as a representative for Businessman’s Insurance Company but was soon hired away to become the manager of Hagman’s Tobacco and Candy Company. George continued to succeed in business setting his sights on a new line of work with his sons Timothy and Stephen in the nursing care industry from 1978 until he retired to his Tulsa home in 1997. George Samuel Barzellone was preceded in death by his wife Mary Frances and is survived by his sister Marguerite Sadler, 4 children, 16 Grandchildren, and 10 Great Grandchildren. The Holy Rosary will be held Wednesday evening at St. Mary’s Catholic Church at 7 P.M. The funeral mass will also be held at St. Mary’s on Thursday at 11 A.M. The Family will be receiving guests after mass in Beckerle Hall. Fitzgerald Southwood Colonial Chapel, 918-291-3500. www.southwoodcolonialchapel.com

The family of George Samuel Barzellone created this Life Tributes page to make it easy to share your memories.

Send flowers to the Barzellone family.