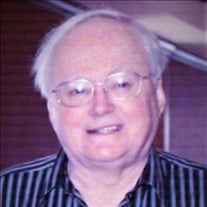 George Dysinger, age 83, passed away at home on Monday, June 21, 2021. George was born on August 11, 1937, in Hooker, OK to Vivian and George A. Dysinger. He received his Bachelor's and Master's degrees in Math from Oklahoma State University. While attending Oklahoma State University he met Evelyn Griffin and they married in 1960. After graduating from OSU, he worked for Phillips 66 in Research and Development in Bartlesville, while working toward his PhD at Rice in Houston, TX. He finished at Rice in 1968 and settled in Bartlesville. He and his wife raised five children in Bartlesville and Tulsa. He worked for Phillips 66 until 1980 when he started running his own businesses full time. George had a lifelong passion for collecting, starting at the age of 14, when he used all his money to buy all the crank phones from the local telephone company. He used this interest to be the original "American Picker," long before the popular television show. He also loved the outdoors, including fishing, hiking, and camping. He spent many "vacations" with his family harvesting wheat at the farm in Walsh or hiking and fishing at the ranch in Stockton. His enjoyment of travel extended beyond the outdoors to the beaches of South Padre, to Europe, and even Asia. He even used his mathematical studies to determine how much luggage a family of 7 could pack for a weeklong vacation, and still fit in a car. He is preceded in death by his parents and his brother Mark and sister Myrna Jean Witt. He is survived by wife Evelyn; sons George Robert and Summer Dysinger of Broken Arrow, Phillip and Melisa Dysinger of Louisville, Russell Dysinger of Tulsa, daughters Renee and Tom Metzner of Longmont, Ahniwake and Matt Rahr of Tucson; grandchildren Sierra, George Zachary, Xavier, Destiny, Arianna, and Blake Dysinger, Danielle and Austin Metzner, Avery Rahr; and brothers David Michael and James Russell.

George Dysinger, age 83, passed away at home on Monday, June 21, 2021. George was born on August 11, 1937, in Hooker, OK to Vivian and George A. Dysinger. He received his Bachelor's and Master's degrees in Math from Oklahoma State University.... View Obituary & Service Information

The family of George Charles Dysinger created this Life Tributes page to make it easy to share your memories.

George Dysinger, age 83, passed away at home on Monday, June...

Send flowers to the Dysinger family.