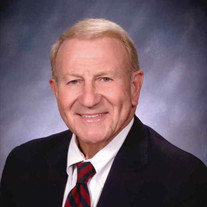 "Gentleman" George J. Sloan Jr. passed away Tuesday May 17th surrounded by his loving family. George fought the bravest of fights with an extended illness. The family wishes to thank The Linden at Stonehaven Square Assisted Living and Memory Care for the extraordinary care and love they extended to our dear father throughout his stay. George was indeed a "gentle" man. Anyone who crossed his path professionally at Sloan's Jewelers, at church, a family gathering or at a sporting event will relay their experience with a smile. He was born September 28, 1930 in Tulsa, Oklahoma to George J. and Agnes Sloan. He was the first born of five children Pat, Dorothy, Charles and Dick. They were lifelong members of Christ the King Church and graduated from Marquette Catholic School. He was an athlete playing baseball, basketball and truly excelled at football. Dad then studied and received a business and Fine Arts degree from The University of Tulsa in 1953. "Son Boy" met the love of all of our lives Susie Zacharias at a Catholic dance; introduced by her late sister Peggy. They married thereafter in her native Buffalo, New York in 1957. A family would soon follow: Jeff the gifted-the talented, Chris the coach, Lisa (Susie 2.0) and Kimmie the smart one, the organizer, the baby. Besides raising their four children, Mom worked in the family business eventually becoming a shareholder. Mom was truly Dad's partner in life. They were inseparable and incredibly loving and supportive parents. Throughout his youth and for his entire professional career George was an owner/shareholder designer and jeweler at the family business, Sloan's Jewelers. Originally located at 4th and Main in downtown Tulsa, he worked the large part of his career at the Utica Square location. Our father was the consummate salesman. Every customer was given equal attention; every one left more knowledgeable about the stone, ring, bracelet or pendant they had originally inquired about. The "pearl story" was a family legend that the American Gem Society could likely use for certification. Mom and Dad retired when Sloan's Jewelers closed in 2001 after 68 years in operation. Our family enjoyed many wonderful vacations with lifelong family friends the Titus's and the Dennehy's or a simple "staycation" painting the family home. Holidays were wonderful surrounded by Grandma and Grandpa Sloan, Aunt Dorothy, Uncle Bob, Aunt Pat, Uncle Jack, Uncle Dick, dear Uncle Charles and cousins. Although generally the holiday would not be complete without the mandatory "family photo session" of crying children and weary adults, finally followed by Dad's trip upstairs to discuss family business. Dad was truly the greatest of fans (University of Tulsa, Bishop Kelley High School and St. Pius X grade school), actually receiving the Greatest Fan Award from Bishop Kelley Football in 2008. He was generally very supportive but always vocal. George would "share" his thoughts regarding the officiating, the coaching and even commenting on our own players mistakes. Quickly followed by admonishments from Susie, Lisa or Kim - "Dad! His parents are sitting right in front of us!" This was of no matter to George Sloan, he called them as he saw them. Dad was a fine painter. He honed his art skills daily drawing caricatures and doodles that were both memorable and humorous. "Hoonie" was generous, wise and thoughtful. Always insisting that anyone in his presence was comfortably seated; we joked he would sit on a cinder block with great satisfaction knowing everyone was properly accommodated. He was a very spiritual man; a lifelong extraordinary minister at St. Pius X Church (where he was a founding member). His evening ritual always ended with prayers for an incredible list of family and friends he had lost over his 91 years. George is preceded in death by his precious wife Susie; his parents George and Agnes Sloan; his sister Patricia (Jack) and Dorothy (Bob). George is survived by his children Jeff (Sandy), Chris (Brenda), Lisa (Brian), and Kim (Rick); his grandchildren Jaden, Haley (Steve), Cory (Mallory), Riley, Mark (Audrey), Matthew, Richie, Taryn (Paul), Nathan and Skylar; 8 great grandchildren, his two brothers Charles and Richard Sloan; numerous nieces and nephews; great nieces and great nephews and the rest of his family and good friends. In lieu of flowers, donations in George's honor may be made to Alzheimer's Association, Neighbor for Neighbor, or St. Pius X Support a Student. Grampa George will be greatly missed but his patience is now rewarded. Rosary service will be Wednesday, May 25th, 7:00 p.m. and Mass of Christian Burial at 10:30 a.m., on Thursday, May 26th, both at St. Pius X Church. Fitzgerald Ivy Chapel, 918-585-1151

"Gentleman" George J. Sloan Jr. passed away Tuesday May 17th surrounded by his loving family. George fought the bravest of fights with an extended illness. The family wishes to thank The Linden at Stonehaven Square Assisted Living and Memory... View Obituary & Service Information

The family of George Joseph Sloan, Jr. created this Life Tributes page to make it easy to share your memories.

Send flowers to the Sloan family.