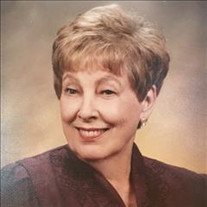 Georgia V. Mowery, 92 passed away on October 3, 2021. She is survived by her daughters, Debra Hagedorn and Linda Davidson; granddaughters Brooke Gerber, Michelle Williams, Melissa Boudiette; grandsons Brent Hagedorn and Jesse Boudiette; greatgrandchildren, Isaak Rayburn, Ethan Johnnis, Piper Williams, Noah Hagedorn, Gia Gerber, Ari Gerber, Arthur Hagedorn, Aidan Sanders, Alec Sanders, John Boudiette and James Boudiette; and her nieces Leslie Elliott, Tracy Upton and Jill Lundell. Georgia Mowery was born February 14, 1929 to Henrietta "Bill" Kaplanis and Gus Kaplanis of Avant, Oklahoma. She is preceded in death by her father, mother, her son Michael E. Mowery Jr., her husband Michael E. Mowery Sr., and her sister Elaine Pharr. Georgia spent her early childhood in Tulsa, Oklahoma, then Red Key Indiana, then returned to Tulsa to graduate from Will Rogers High School. She was married to Michael Mowery for 70 years and became widowed in 2018. Georgia was a stay-at-home Mom for her children's early years and had many hobbies including golfing, gardening, painting, sewing, crocheting and refinishing furniture. She started working when her children got older, working as a transportation specialist for Agrico Chemical Company in the 80's. She stayed active most of her adult life. As she got older, she still liked to talk daily to her friends, mostly by telephone, but always made a point to check up on them. Georgia will be greatly missed by her daughters, grandchildren, great grandchildren, nieces, and her many longtime friends. A memorial service will be held 12 p.m. Friday, October 22 at Fitzgerald Southwood Colonial Chapel. There will be a reception following the service in Fitzgerald's Family Center. Donation's in Georgia's honor may be made to the American Kidney Fund.

The family of Georgia Mowery created this Life Tributes page to make it easy to share your memories.

Send flowers to the Mowery family.