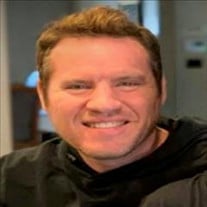 Gilbert Maximilian Blumenthal, loving father, son, and brother, passed away December 24, 2020 from Covid 19 and Pneumonia. He was 42 years old. Gil was born in Tulsa, Oklahoma on September 5, 1978 to Mark and Brenda Blumenthal. Gil was tenacious and dedicated to any effort. He and his father enjoyed repairing lawn mowers, motorcycles, and automobiles. Regardless of what failed, Gil and his father would repair it together. These skills proved invaluable when Gil opened his first lawn care business. Additionally, he used this knowledge to assist others with car maintenance problems during his teenage years and beyond. In his youth, Gil joined the Boy Scouts of America, ultimately attaining the rank of Eagle, scouting's highest honor, at age 17. Gil earned his Associate's degree and later, his Bachelor's degree. He held a Federal Aviation Administration Airframe and Power Plant Mechanics license, allowing him to legally repair any aircraft and aircraft engine, and sign off log books to return the aircraft to airworthiness condition. He brought his passion for cars and engines to the next generation, teaching high school students automotive skills at Tulsa Tech. He earned his Master Certification from The National Institute of Automotive Service Excellence. Gil's ability, enthusiasm, and genuine concern as an educator was honored in 2018 when he was awarded "Teacher of the Year", not only for the Broken Arrow campus where he taught, but for the entire Tulsa Tech District, including all seven campuses. In 2009, Gil became a proud father when his incredible son Graesyn was born. They bonded over a shared love of sports, fishing, dirt bikes, business, and automotive mechanics. Gil shared his passion for working on cars with Graesyn, just as his father before him. Gil was a member of the masonic fraternity like his father, and was planning on becoming a Shriner at the upcoming Ceremonial. Gil was preceded in death by grandparents Gilbert Blumenthal, Arthur and Beverly Yellen, and Cecil and Emma Rose. Gil is survived by his son Graesyn Hoss and his son's mother Nicole Hoss, parents Mark and Brenda Blumenthal, sister Kim (Dan) Balsinger, along with multiple cousins, aunts and uncles. In lieu of flowers, donations in Gil's memory can be made to the Akdar Shrine Hospital Transportation Fund either online at or by mail to: Hospital Transportation Fund, C/O Akdar Shrine Temple, 2808 South Sheridan Road, Tulsa, OK, 74129. Donations may also be made in Gil's memory to Temple Israel at 2004 East 22nd Place, Tulsa, OK, 74114, or online at . A private graveside service will be held Tuesday, December 29, 2020 at 2 PM . You can join the funeral virtually on zoom: Meeting ID: 868 3281 3207; Password: GeneralLee Fitzgerald Ivy Chapel, 918-585-1151

Gilbert Maximilian Blumenthal, loving father, son, and brother, passed away December 24, 2020 from Covid 19 and Pneumonia. He was 42 years old. Gil was born in Tulsa, Oklahoma on September 5, 1978 to Mark and Brenda Blumenthal. Gil was tenacious... View Obituary & Service Information

The family of Gilbert Maximilian Blumenthal created this Life Tributes page to make it easy to share your memories.