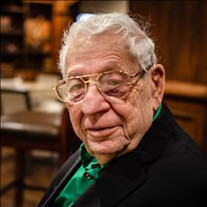 Harry Friedberg left this life peacefully after 102 years on June 9, 2021, at his home in Broken Arrow, Oklahoma. His family and beloved dog surrounded him with love at his passing. Harry was born March 17, 1919, in Kansas City, Missouri to Samuel and Rose (Bernat) Friedberg. Sam and Rose left Lithuania in the early 1900s to escape the pogroms of Eastern Europe. Harry grew up in Kansas City and graduated from Central High School in 1936. He continued his education by taking a few business courses at Kansas City Junior College. In 1940, Harry was drafted into the US Army. He completed basic training in Little Rock, Arkansas, and told many stories of his time there. On December 7, 1941, Harry was AWOL with some buddies for a weekend road trip to Kansas City. Harry was bowling with his girlfriend Miriam at the Plaza Bowl when they learned of the bombing of Pearl Harbor. So Harry and his friends went back to base to receive their orders. Harry was preparing to ship out with his company when he became ill with rheumatic fever. He remained in the hospital while his comrades went to Europe. Many of them perished in the Battle of the Bulge. However, after his recovery, Harry was a sergeant in H Company, 35th Division of the Western Defense Command in Special Services. He was stationed in San Diego and Balboa Park in California. While serving in San Diego, he married his Kansas City sweetheart Miriam Betsy Rosen on May 23, 1943. Upon his discharge from the Army in 1944, Harry returned to Kansas City to care for his wife and son, Ron. Harry worked a variety of jobs in the jewelry and optical business, and traveled all over the country for business. Harry and Miriam retired to Sun City, Arizona, in 1985. But retirement did not slow Harry down one bit. They were very active in Temple Beth Shalom (they were founding members) and the Jewish community center. Harry played golf several times a week, bowled, played bridge with Miriam, and volunteered with his local VA driving a van transporting medical records from hospitals and other medical facilities. He was also active in the American Legion and treasurer of the local chapter of Jewish War Veterans. They moved to Tulsa in 2005 to be closer to family. Harry continued to be involved in his new community, joining Temple Israel, playing bridge twice a week, serving as treasurer for Heller Theatre Company when he was in his 90s, and continuing to drive (safely) at 101. Harry was preceded in death by his parents, Sam and Rose, his brother, Eddie Friedberg, his beloved wife of 64 years, Miriam, and his middle son, Richard "Richie" Friedberg. He is survived by his son Ron and daughter-in-law Kelley of Broken Arrow, son Randy and partner James Bass of Kansas City, grandchildren Dawn, Larry, and Andrea, three great-grandchildren, and many nephews and nieces. Graveside service is Monday, June 14, 2021, 10:00 a.m. at Rose Hill Memorial Park Cemetery, 4161 E Admiral Place (Admiral and Yale), in Tulsa, OK. In lieu of flowers, please consider making a memorial donation to St. Jude Children's Research Hospital () or the Coffee Bunker (), an organization providing services to veterans as they transition to civilian life. Fitzgerald Ivy Chapel, 918-585-1151

Harry Friedberg left this life peacefully after 102 years on June 9, 2021, at his home in Broken Arrow, Oklahoma. His family and beloved dog surrounded him with love at his passing. Harry was born March 17, 1919, in Kansas City, Missouri to... View Obituary & Service Information

The family of Harry Friedberg created this Life Tributes page to make it easy to share your memories.

Harry Friedberg left this life peacefully after 102 years on...