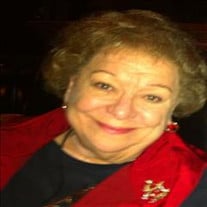 A devoted and loving wife, mother, grandmother, greatgrandmother and friend, Helan Addie Barrick went home to be with our Heav- enly Father on Tuesday, July 21, 2020, having completed her extraordinary life of 87 years here on earth. Helan was born on March 25, 1933 in Warrenton, Oregon. She was the beloved daughter of the late Orville and Frances Shultz, also preceded in death by her husband of 60 years, Marion Frank Barrick Jr.; her brother, John Shultz; sister, Clara Jean Hegge and daughter-in-law, Dana Barrick. Helan and Frank met 70 years ago when Frank was sit- ting in an ice cream parlor in Warrenton, Oregon, when, un be known to him, the love of his life walked in and went straight to the juke box. That was all she wrote. On November 9, 1951, Frank and Helan were united in marriage and began a 60 year journey together. That journey brought them to Tulsa in the 1950's where they proceeded to raise their family of 6 children. Over the years, Frank and Helan enjoyed many friendships through various activities such as the Tulsa Young Men's Club, bridge club, square dancing and extensive traveling to England, Germany, Holland, Switzerland, Australia and Japan, as well as many family vacations to the Pacific Northwest. Helan poured her entire heart into raising her family. In the late 60s, she began to explore a deep-seated passion of painting that was passed down from her beloved grandmother, Addie Belle Shultz. Helan was once quoted as saying, "The smell of oil paint has been "perfume" to me ever since I was old enough to slip into my grandmother's painting room where there was always wet canvasses and palettes." She began taking painting classes from local artists in Tulsa and everyone quickly realized that she had a blooming natural talent. She worried that her family would be somewhat neglected when she began painting but she was also quoted as saying, "They have all been very supportive of my painting, in spite of less than inspired dinners at times and forgotten pick ups at the laundry. And bless their hearts, not one of them has ever (yet) mentioned the possibility that I can't possibly live long enough to paint up all the wood in the garage, attic, under the beds, in the spare room, etc. etc. etc.!" One of her kids' favorite memories is of vaca- tioning in the cabins at Lake Tenkiller. On one such visit, it rained the whole time. But Helan, everready with her paints and brushes, proceeded to paint a life-sized apple tree on the corner wall of the cabin! Her love of art grew into an eternal passion and she soon began teaching painting lessons all over the United States and eventually in countries such as Japan, Australia, Switzerland, Germany and many more. During her career as an artist, she published many instructional Tole and Decorative Painting books. She was a valued member of the NSTDP (National Society of Tole & Decorative Paint- ers) and earned the honor of becoming a Master Decora- tive Artist. She traveled the country and the world teaching her original artwork, which usually consisted of scenes of her beloved "Whippersnappers". For over 30 years, Helan would hold a "local" weeklong seminar in her hometown of Tulsa or Chagrin Falls, Ohio (in the 1980's) and the many available spots would be filled in a matter of minutes. Eventually, she had to offer an additional week to meet the demand. Painters from as far away as Japan would attend her local semi- nars and Helan made lifelong friends from all over our world. Her favorite place in the world was anywhere on the Oregon coast, where she grew up, Family vacations were usually spent in Astoria and Cannon Beach, Oregon and on the coast of Washington State. In 1979, Frank was offered a promotion and they moved to the lovely town of Chagrin Falls, Ohio. This became Helan's 2nd favorite place in the world. She formed long-lasting relationships with the Amish community, which is reflected in a large majority of her artwork. After 8 years in Chagrin Falls, Frank retired and they returned to Tulsa to be near family. Helan Barrick was a Legend and a Rock Star, not only in the Decorative painting world, but also in her every day life. She will be missed by so many. Helan is survived by: their six children son, Frank and wife, Alison Barrick of Brandon, FL; son, John, of Tulsa; daughter, Teresa Tallarico of Marshfield, MA; son-in-law, Steven Tallarico of Marshfield, MA; daughter, Lisa DiRico and husband, Mark of Norwell, MA; son, David and fiancee, Brenda Johnson of Tulsa; daughter, Sandi and husband, Dr. Greg DiSalvatore, of Tulsa; daughter-in-law, Dawn Barrick; her brother, Orville Shultz and wife, Jane, of Cottage Grove, OR; 11 grandchildren, Dr. Brett Barrick and wife, Whitney, Elena Ferril and husband, Jeremiah, Lora Barrick, Chelsea Tallarico Foster and husband, Jon, Taj Tallarico and wife, Brittany, Deider, Danna and Dominique Barrick, India and Vann Wilkerson, and Ella DiSalva- tore; and 3 great-grandchildren, Monroe and Sloane Barrick and Vincent Frank Foster. Helan's family would also like to acknowledge and thank her very loving and close friends, Becky Faber and Shirley Carr, both of Tulsa; the incredible healthcare workers of RoseRock Hospice and her loving and caring in-home caregivers, Elizabeth, Angie, Rhea and Tabby. Viewing will begin at 9:00 a.m. and the funeral service will be held at 11:00 a.m., Wednesday, July 29, 2020, at Fitzgerald Southwood Colonial Chapel, 918-291-3500

A devoted and loving wife, mother, grandmother, greatgrandmother and friend, Helan Addie Barrick went home to be with our Heav- enly Father on Tuesday, July 21, 2020, having completed her extraordinary life of 87 years here on earth. Helan was... View Obituary & Service Information

The family of Helan Barrick created this Life Tributes page to make it easy to share your memories.

Send flowers to the Barrick family.