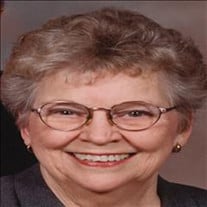 Helen Virginia Miller, 91, of Broken Arrow, Oklahoma, died on October 9, 2021. Helen was born on July 12, 1930, in Ponca City, Oklahoma. She graduated from Nixa, Missouri High School. While there, she was a cheerleader, drum majorette, Vice President of the Student Council, and the Editor of her high school newspaper, and yearbook. After graduation, she furthered her education by obtaining her bachelor's degree (with honors) from Drury University, in Springfield, Missouri, majoring in home economics, and was a member of the Kappa Delta Sorority. Later she attended East Central College in Ada, Oklahoma and obtained her master's degree in history, as well as her teaching certificate (K-12). After she completed her education she accepted a position as an elementary teacher at Struthers, Oklahoma prior to accepting a position as an instructor at Saint Joseph Catholic School in Ada, Oklahoma. On November 21, 1953, she married James Paul Miller at Saint Joseph Catholic Church in Springfield, Missouri. After a few years, they eventually moved to Ada, Oklahoma to raise their family and where both were active members of the Catholic church. During their time in Ada, she helped coordinate Golden Club, Mothers Seton Study Club, and in their early years prepared lunches for the workers while a new Saint Joseph's Church was being built. She was very active in the Altar Society and worked as both a teacher and principal at the school there. She was a loving wife, mother, and dedicated homemaker that raised six children. She is survived by her children; Colonel Greg Miller, Dr. Paul Miller, Virginia Barnett, Patti Miller, Mark Miller, and Mary Rice , ten grandchildren, and six great-grandchildren. She was preceded in death by her parents, and husband, James P. Miller. Memorial donations may be made to the Florence Lee Fund at Saint Joseph Catholic Church in Ada, Oklahoma. A prayers service will be held in the chapel of Fitzgerald South Funeral home in Tulsa, Oklahoma on November 12th, at 4:30 pm. A funeral mass will be held at St. Joseph Catholic Church in Ada, Oklahoma on November 13th, 2021 at 11:00am.

Helen Virginia Miller, 91, of Broken Arrow, Oklahoma, died on October 9, 2021. Helen was born on July 12, 1930, in Ponca City, Oklahoma. She graduated from Nixa, Missouri High School. While there, she was a cheerleader, drum majorette, Vice... View Obituary & Service Information

The family of Helen Virginia Miller created this Life Tributes page to make it easy to share your memories.

Send flowers to the Miller family.