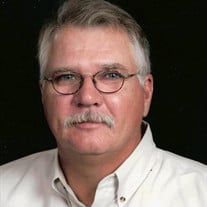 On Sunday January 10th, 2021, Howard S. Coughlin, loving husband and grandfather of three grandchildren, passed away at age 69. Howard was born on July 24th, 1951 in Cleveland, Ohio to William and Grace Coughlin. He graduated high school in 1970 from R. Nelson Snider High in Fort Wayne, Indiana. He worked for the City of Tulsa, with the Traffic Operations Department from February 1982 until his retirement in January 2017. Howard was a dedicated Catholic and attended Saint Catherine's Church, where he became a Eucharistic Minister and was a member of the Knights of Columbus for 25 years, promoted to the title of SR. Knight. Howard loved helping with charities and volunteering for special events. He was also a member of the AOH (Ancient Order of Hibernians) an Irish Catholic fraternal organization with the Bobby Sands Division for about 17 years. Howard was half Irish and enjoyed learning and participating in his Irish heritage. Along with love and compassion, his quick wit and infectious laugh would always make anyone smile. He was a kind man with a truly loving soul, loved and admired by friends and family. Most of all Howard loved his wife Cyndi Coughlin and their three grandchildren Angel, Jadis and Araya, who Howard and Cyndi have been raising for three and a half years now. The children lost their mother Traci Marson (Cyndi's daughter) to sudden illness. Howard stepped right up to love and care for the children, and he always loved and enjoyed spending time with his family. Howard will be truly missed. Howard is now in heaven and left behind his loving wife Cyndi, his three grandchildren, his sister Maureen Locke, his brothers William and Martin Coughlin, his step-sister Mary McIntosh and step-brother Eric McIntosh. Rosary on Monday, January 25th at 7:00 pm and a Funeral Mass Tuesday, January 26th , both at St. Catherine's of Alexandria Catholic Church. You are encouraged to watch the funeral mass live on the church's Facebook page: https://www.facebook.com/saintcatherinechurch/ instead of attending in person, at 2:00 pm on Tuesday, January 26th. Fitzgerald Ivy Chapel, 918-585-1151

The family of Howard Stanley Coughlin created this Life Tributes page to make it easy to share your memories.

Send flowers to the Coughlin family.