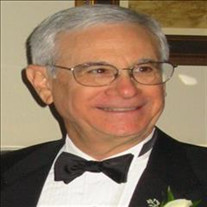 H.M. "MIKE" MAY Howard Michael "Mike" May, a pillar of the Bartlesville community for nearly 60 years, passed away in Tulsa on March 31, 2020. He was 85. Born and raised in Bartlesville, he was the 2nd son of Jacob and Helen May. He graduated from the University of Michigan in 1956 with a business degree. He was a member of the Zeta Beta Tau fraternity, where his brothers became lifelong friends. After college, Mike joined the Navy, proudly serving as an officer attached to the Pacific Fleet. On a leave from naval service, his brother Jack set him up with Marty Ruvel. It was a match made in heaven. Mike and Marty married and moved to Bartlesville in 1960, where they raised their family and lived together for 50 years. Mike joined his father in the family clothing business, May Brothers, where he clothed countless men and boys over the years. May Brothers endured for 99 years before closing it in 2009. Unable to give up his love for his work and customers, Mike opened a custom clothing business, which he operated until his passing. Deeply devoted to Bartlesville, Mike served on countless boards, including ones for Jane Phillips Hospital, Bluestem Foundation, Bartlesville Symphony, YMCA, Boys and Girls Club, OK Mozart, Big Brothers Big Sisters, Rotary, Green Country Senior Living, Bartlesville History Museum, Bartlesville Chamber of Commerce, Bartlesville Community Foundation, Bartlesville Education Promise, and many more. He also led the Menswear Retailers of America and served on the board of the National Retail Federation. With a ready smile and a booming laugh, Mike was a friend to all he met and a true gentleman. He loved Bartlesville, his family and friends, college football, golf, music, theater, and dessert. After Marty's untimely passing, Mike met and married Sandi Tilkin in 2014. They enjoyed life together to the fullest, traveling, attending cultural events and dinner parties with friends, and being with family. Sandi was a loving and caring companion, and her children � Karen, Michael, and Lori and their families � welcomed him with open arms. Mike would often say how lucky he was to have had two such extraordinary women in his life. Mike's most enduring � and his proudest � legacy is his four sons and their families: Mark of Culver City, California; Scott and Wendy of Norcross, Georgia; Craig (Tigger) and Dianna of Denver, Colorado; Billy and Sari of Larchmont, New York; and grandchildren Nicole, Jake, Harris, Jessica, Charlie and Alex. He is also survived by his brother Larry May; sister-in-law Betsy Zimbalist and her husband Stuart, and many nieces, nephews, and loving cousins and extended family members across the country. Mike was predeceased by his parents Jacob and Helen May, his wife Marty, and his brother Jack. The family will hold a public memorial in Bartlesville later when conditions permit such an event. Donations in Mike's memory can be made to the Bartlesville Community Foundation, Bartlesville Boys and Girls Club, or Bartlesville Education Promise. Fitzgerald Ivy Chapel, 918-585-1151

H.M. "MIKE" MAY Howard Michael "Mike" May, a pillar of the Bartlesville community for nearly 60 years, passed away in Tulsa on March 31, 2020. He was 85. Born and raised in Bartlesville, he was the 2nd son of Jacob and Helen May. He graduated... View Obituary & Service Information

The family of Howard Michael May created this Life Tributes page to make it easy to share your memories.

H.M. &quot;MIKE&quot; MAY
Howard Michael &quot;Mike&quot; May, a pillar of the Bartlesville...

Send flowers to the May family.