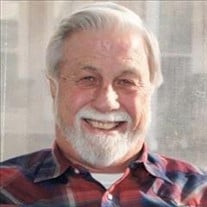 Hugh Douglas Goins, 75, of Delaware, OK, passed away on December 25, 2020. He was born on March 30, 1945, in Tulsa, OK, the son of Earl Thomas "Tom" and Thelma Callie Jo (Seawright) Goins. He was raised in the Tulsa area, graduating from East Central High School in the class of 1963. He then attended Eastern Oklahoma A&M prior to enlisting in the US Air Force in 1966. He was stationed in England at Bentwaters AFB during his time of service. On October 21, 1983, he married Elizabeth Hamer, the love of his life, in Owasso, OK. Their blended family was quick to bond, and they enjoyed annual beach vacations to the family beach house at Ocean Isle Beach, NC. He wasn't only "dad" to his kids, but to their friends as well. Hugh was a well-known banker in the Tulsa metro area for over 30 years. Following an early retirement from the bank, he pursued his dream of owning a large piece of land, where he and his family could hunt, raise cattle, and enjoy many family get togethers. He enjoyed the peace and tranquility that came with country living. Many family members and friends gathered there, where countless hours of outdoor adventures were enjoyed by multiple generations. He enjoyed working and building on projects in his shop, fishing and hunting with his grandchildren, operating the gun shop, owning and piloting his small aircraft, motorcycle excursions with friends, target/skeet shooting, flying model air planes, but mostly spending time with the people he loved. He will always be affectionately remembered as "Papaw" by his grandchildren and great-grandchildren. He is survived by his wife, Elizabeth, children, Chip Hamer, and his wife Melissa, of Owasso, Jason Goins, of Leander, TX, Kelly Goins, of Skiatook, OK, and Joseph Goins, and his wife, April of Broken Arrow, OK, grandchildren, Mitchell, and his wife, Brittany, Ashley, Josh, and his wife, Mercedes, Morgan, Miranda, Madi, Sarah, Bailey, Aly, Michael, Conley, Tori, Tyler, Dylan, and Presley, great-grandchildren; Max, Ellie, Olivia, and Jameson, brother, Glenn Goins, and his wife, Jackie, of Catoosa, brother-in-law, Charles Midgley, and his wife Susan, of Bennettsville, SC, and numerous other extended family members and friends. He was preceded in death by his parents, and son, Rick Goins. Visitation will be held on Monday, January 4th from 4:00 - 7:00 PM, and funeral services will be held at 1:00 PM, on Tuesday, January 5th both at Fitzgerald Southwood Colonial Chapel. Interment will immediately follow the service at Floral Haven Memorial Gardens. For those unable to attend in person, the service will be livestreamed here on Hugh's memorial page.

Hugh Douglas Goins, 75, of Delaware, OK, passed away on December 25, 2020. He was born on March 30, 1945, in Tulsa, OK, the son of Earl Thomas "Tom" and Thelma Callie Jo (Seawright) Goins. He was raised in the Tulsa area, graduating from East... View Obituary & Service Information

The family of Hugh Goins created this Life Tributes page to make it easy to share your memories.

Hugh Douglas Goins, 75, of Delaware, OK, passed away on December...

Send flowers to the Goins family.