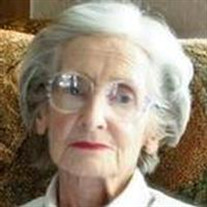 For he will command his angels concerning you to guard you in all your ways; they will lift you up in their hands, so that you will not strike your foot against a stone. On Friday, February 5, 2010, the angels came and brought Isabella J. Grant (nee Koebert) peacefully into the arms of Jesus and his mother, Mary. Isabella had a particular devotion to the Mother of God, and prayed the rosary as often as she could. Each morning she would rise before anyone else and pray quietly, asking God to bless her children, every member of her family and all of her friends. Even up to the last moments of her life, she was concerned about the welfare of her children and their families. Isabella was born in Littleton, WV on March 15, 1918. Eventually, the family moved to Clarksburg, West Virginia. She attended St. Mary’s Catholic School in Clarksburg, graduating in 1936. After graduation, she worked at the Ritz Newsstand in a local theater. On February 14, 1941, she married Albert E. Grant, Jr. at Sacred Heart Church in Washington, DC. In 1951, the family moved to Henryetta, Oklahoma where Isabella lived most of her life. Isabella gave birth to four children, Frederick R. Grant, NinetySix, South Carolina, Albert E. Grant III, Tulsa, Oklahoma, William Paul Grant, Cushing, Okla- homa and Mary Elizabeth Yates, Tulsa, Oklahoma. She was preceded in death by her husband, Albert E. Grant Jr.; her parents, Charles and Loretta Koebert; her sisters, Mary Frances Fluharty, and Julia M. Burns; her brothers, William Donald Flaherty , Robert Koebert and John Koebert and her granddaughter, Nancy Grant. Besides her children, Isabella is survived by her son-in-law, Stephen Yates; her daughters-in-law, Nancy Grant and Son Cha Grant; her grandchildren, Kristen Grant, Kelly Grant, Kevin Grant, Kirk Grant, Dwaine Grant, Bryan Grant, Sarah Yates, and Bridget Yates. She is also survived by her sisters, Alice L. Rollins and Patricia J. Sokol, her brother-inlaw, James Grant and sister-in-law, Mary Reider; her adopted grandchildren, Kevin Nguyen, Anthony Pham and Paul Dang and Igmedio Cajefe. She had 12 great-grandchildren, numerous nieces and nephews, and many friends and acquaintances. A memorial service is scheduled for 6:00 p.m. at St. Michael’s Catholic Church, 1004 W. Gentry, Henryetta, OK on February 9th. Funeral mass will be held February 10th at St. Benedict’s Catholic Church, 2200 W. Ithica St in Broken Arrow, OK at 11:00 a.m. followed with interment at Calvary Cemetery. Fitzgerald Southwood Colonial Chapel 291-3500. This obituary was published in the Tulsa World on 2/9/2010.

For he will command his angels concerning you to guard you in all your ways; they will lift you up in their hands, so that you will not strike your foot against a stone. On Friday, February 5, 2010, the angels came and brought Isabella J. Grant... View Obituary & Service Information

The family of Isabella Jean Grant created this Life Tributes page to make it easy to share your memories.

For he will command his angels concerning you to guard you in...

Send flowers to the Grant family.