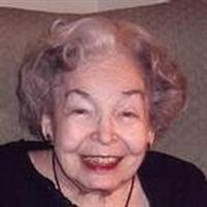 GALLAGHER, Jacqueline Joanne Voegeli, 96, passed away July 20, 2009, in Tulsa, OK. She was born February 9, 1913 in Oklahoma City, OK to George W. Voegeli and Etelka Price Voegeli who preceded her in death. She graduated from Holy Family High School in Tulsa, where she was crowned football queen. She married John Patrick “Jack” Gallagher on May 29, 1933. She and Jack had a wonderful marriage until Jack died on February 1, 1963. A devout Catholic, for many years she attended daily Mass at the Church of St. Mary where she was a charter member. She volunteered with the St. Francis Hospital Auxillary, Madonna House and all projects with St. Mary’s. Her life was punctuated with many fun, family trips. She was also preceded in death by her parents and brothers Robert W. Voegeli and Richard A. Voegeli. She will be remembered as a loving and prayerful mother, grandmother and great grandmother. She is survived by her daughter Ann G. LaGere of Tulsa and husband Gary, her son John P. “Pat” Gallagher, Jr. of Tulsa and wife Kathryn, grandchildren Shelley L. Carlin of Dallas, TX and husband Steve, David G. LaGere of Tulsa and wife Amy, Jamie L. Taylor of Tulsa and husband Glenn, Jack C. LaGere of Dallas, TX and wife Kate, Michelle G. Rock of Denver, CO and husband Cory, and Shawna G. Thompson of Folsom, CA and husband Darryl; great grandchildren Andy Carlin, Ellie LaGere, Anna LaGere, Abby Taylor, Jackson Taylor, Louisa J. LaGere, Christopher C. Rock, Kathryn C. Rock, Morgan P. Thompson, and Darryl A. Thompson III and her loving caregiver and friend, Betty Scheib. In lieu of flowers, contributions can be made to the Church of St. Mary or Catholic Charities. A Rosary will be said 7pm Wednesday, July 22, 2009 at The Church of St. Mary. There will be a reception beginning at 10:00am, Thursday, July 23, 2009 followed by a Mass of Christian Burial at 11:00am both at The Church of St. Mary. The Fitzgerald Southwood Colonial Chapel, 291-3500. www.southwoodcolonialchapel.com

The family of Jacqueline Joanne Voegeli Gallagher created this Life Tributes page to make it easy to share your memories.