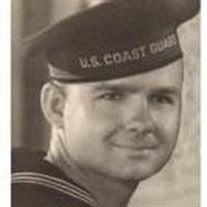 James Luther Dunbar, 92, died Monday ,May 31, 2010 in Tulsa, Oklahoma. He was born to Ralph and Pauline (Herron) Dunbar on December 22, 1917 in Tulsa, OK; he was one of nine children. After graduating from Central High School in Tulsa, in 1936, he worked as a ranch hand and competed in many rodeos as a steer wrestler. On December 14, 1941, he married the love of his life, Patricia Miles, and treated her young son, Gary, as his own, providing for the two of them in whatever way he could. During WWII, he joined the Coast Guard and manned the engine room of the destoyer escort USS Howard D. Crow (DE-252), making numerous Atlantic crossings escorting allied shipping. After the war, he worked in Pawhuska, OK, Nogales, AZ and Santa Fe, NM as a saddle maker and leather craftsman, auto upholsterer, auto mechanic, finishing his working years as a service center manager for a pair of auto dealerships in Albuquerque, NM. After retiring in 1980, he and Patricia moved back to Oklahoma and took up residence on the shores of Keystone Lake, just outside Mannford. Extremely good with his hands and able to visualize solutions in his head to just about any challenge, he could come up with clever and creative ways to tackle the mundane just as easily as he could churn out an intricately decorated saddle. Preceded in death by his parents, brother Ralph and sisters, Rose Julien and Florence Dunbar, he is survived by his wife of 68 years, brothers, John Dunbar of Kelleyville and William Dunbar and wife, Gerry, of Broken Arrow, sisters, Betty Bovee of Salem, Oregon, Martha Dunbar of Bristow, Mary Helen Costable of Tulsa; son, Gary Victor, and wife, Penny, granddaughter, Marycarol and husband, Jack Page, grandsons, Chris Victor and wife, Sharon, Craig Victor and wife, Carla, Justin Victor and wife, Liz, Matthew Victor, and ten great-grandchilren. Viewing will be 2-5 pm, Friday, June 4, 2010, and Rosary at 7 pm, Friday June 4, 2010 both at Fitzgerald Ivy Chapel, 1402 S Boulder in Tulsa. Funeral Mass will be 10:00 am, Saturday, June 5, 2010 at St. Bernard of Clairvaux Catholic Church in Tulsa, 4001 E 101st St S. Msgr. Patrick Gaalaas will be officiating. Interment will be at Calvary Cemetery, Tulsa. Condolences for the family of Mr. Dunbar can be posted at: Fitzgeraldivychapel.com.

James Luther Dunbar, 92, died Monday ,May 31, 2010 in Tulsa, Oklahoma. He was born to Ralph and Pauline (Herron) Dunbar on December 22, 1917 in Tulsa, OK; he was one of nine children. After graduating from Central High School in Tulsa, in... View Obituary & Service Information

The family of James Luther Dunbar created this Life Tributes page to make it easy to share your memories.

Send flowers to the Dunbar family.