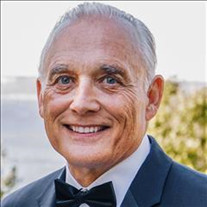 James (Jim) L. Edwards Jr. passed away surrounded by family on July 27th, 2021, at the age of 68. Jim was born September 29th, 1952, in Hays, Kansas to parents Armella and James L. Edwards Sr. Jim spent most of his youth in Great Bend, KS, graduating from Great Bend High School in 1970. After graduating from high school, Jim attended Fort Hays State earning a business degree in 1974. Soon after graduation, Jim met the love of his life, Susan Marie Fischer, at a Doobie Brothers concert with friends. They married in 1975 and enjoyed a long and blessed marriage. Jim began his career in the United States Marine Corps and was commissioned as a Second Lieutenant in 1974. He went to flight school in Pensacola, FL, and became a Naval Aviator flying the CH-46 Sea Knight. His first duty station was in Southern California with squadron HMM 161. Throughout the late 1970s, he was deployed to Asia-Pacific where he flew multiple missions supporting a variety of operations. During this time, he also attended The University of Southern California where he graduated in 1980 with a master's degree in Systems Management. He transitioned to the Marine Corps Reserves in 1981 and moved to Tulsa, OK, with his wife and two sons. Jim retired as a Marine Colonel after 30 years of service in 2005. While living in Tulsa, Jim enjoyed a productive career in the oil and gas industry including Amerada Hess Corporation, Kaiser Francis Oil and Gas Development Corporation. Beyond his corporate career, Jim engaged in a few entrepreneurial adventures starting small businesses. After a successful career in business, Jim and Susan decided to move out of their town home and into a family ranch house south of Tulsa where they could ride horses and run cattle. Jim quickly became acquainted to this new lifestyle finding joy in the simpler things in life. Jim was a devoted husband, father, and grandfather. He was a proud supporter of Oklahoma Football and United States Marine Corps. He lived every day with honor, integrity, and joy. Above all else, Jim cherished each moment he was able to spend with his wife and four children. Jim will be remembered for his kind heart, dedication to others, and steadfast love for his friends and family. Jim is survived by Susan Edwards, his faithful wife of 46 years, three siblings and brother-in-law: Denise and husband Chuck Schmitt of Lincolnton, NC, Dean and wife Julie Edwards of Wichita, KS, Scott Edwards of Great Bend, KS, and Clifford Burkhart of Eufaula, OK. Jim leaves behind three children: Bryon Edwards of Kailua, HI, Rachael and husband Alex Kirkpatrick of Tulsa, OK, and Micaela Edwards of Los Angeles, CA. Jim had two grandchildren, Kael and Hayden Edwards of Kailua, HI. He was predeceased by his son Scott Edwards, his parents, Armella and James Edwards, and his sister, Barbara Burkhart. A viewing will be held Friday, July 30th from 3:00-6:00pm at Fitzgerald Southwood Colonial Chapel, 3612 East 91st Street, Tulsa, OK. The rosary will begin at 6:00pm. The memorial service will be held Saturday, July 31st, 2021 at 9:00 a.m. at St. Bernard's Parish, 4001 E. 101st Street South, Tulsa, OK.

The family of James Edwards, Jr created this Life Tributes page to make it easy to share your memories.

Send flowers to the Edwards family.