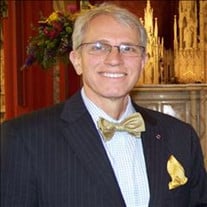 A Mass of Christian Burial for James Richard Gray will be held at 10:30AM Tuesday, December 15th at Holy Family Cathedral where he had been a parishioner for many years. A live stream will also be available on the cathedral's YouTube for those wishing to attend remotely. The Burial Procession and Graveside will follow at Calvary Cemetery. Friends may visit on Monday, December 14th from 3PM to 5PM at Fitzgerald's Southwood Colonial Chapel. A Rosary will be held at Holy Family Cathedral during the evening of December 14th at 7PM. James Richard Gray, better known as Jim, passed away Wednesday, December 2nd after battling Covid-19 for several weeks. He was 61. Born July 10, 1959 to James Frederick Gray and Stephanie Maliborski Gray at Camp Pendleton Naval Hospital in San Diego County, California. He was raised in Huntington Beach, California before relocating to Tulsa in 1975. Jim was a 1977 graduate of Union High School. Upon graduation he attended the American School of Broadcasting earning a Broadcasting License that would begin his career in radio. He worked for several stations throughout college. Jim continued his education at the University of Oklahoma where he studied Television Broadcasting. While attending OU he worked for the school's radio station, KGOU and produced the Barry Switzer Show. He later attended the University of Tulsa where he graduated with a degree in Radio and Television Communication in 1984. Jim began his career with an internship at the Tulsa Arts and Humanities Council, followed by several years with local television news stations, Sports Center, and Preview Network/TV Guide. He ultimately ended up at Dentsply Sirona, where he was a Manager of CE Curriculum Clinical Affairs for the past 24 years. Jim was a man of great faith, a devout catholic attending Tulsa's Holy Family Cathedral until he transferred to Saint Benedict in Broken Arrow. He could be found volunteering his time with the Knights of Columbus cooking funnel cakes at the Tulsa State Fair, serving monthly pancake breakfasts and ushering Sunday Mass. Jim was passionate about music and donated his time by serving as a board member for Tulsa Repertory Musicals. This wonderful husband, father, brother, uncle and friend will be missed by all who knew him. Those family that survive include his wife Susan and daughter Hannah, of their home in Broken Arrow; his son Will of Tulsa; sister Tess and brother-in-law Bob Schroeder of Sapulpa; father-in-law Bill Hager of Bradenton, FL; sister-in-law Holly and husband Mike Davis of Grand Prairie,TX; brother-in-law Bill Hager of Bradenton, FL; as well as numerous nieces and nephews. Jim was preceded in death by his mother Stephanie Maliborski Gray; father James Frederick Gray; step mother Evelyn Virginia Gray; mother-in-law Mickey Hager; sister Becky Dress; brother Byron Gray; and infant daughter Kathryn Ann Gray. Those wishing to contribute in Jim's honor may do so by donating to Catholic Charities of Eastern Oklahoma, Tulsa Repertory Musicals, or Starlight Concert Bands.

A Mass of Christian Burial for James Richard Gray will be held at 10:30AM Tuesday, December 15th at Holy Family Cathedral where he had been a parishioner for many years. A live stream will also be available on the cathedral's YouTube for those... View Obituary & Service Information

The family of James Richard Gray created this Life Tributes page to make it easy to share your memories.

A Mass of Christian Burial for James Richard Gray will be held...

Send flowers to the Gray family.