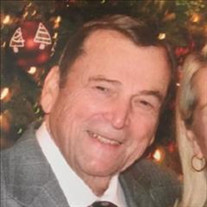 Dr. James S. Torchia, died on Thursday January 7, 2021. He was born on May 21, 1932 in Pittsburg Kansas. His parents were James D. Torchia and Edith (White) Torchia from Columbus, KS. Jim attended Columbus KS schools and received his undergraduate degree from Kansas State Teachers College in 1954. He then attended UMKC School of Dentistry graduating in 1957. Jim went on to graduate with a degree in Orthodontics in 1959. Jim practiced orthodontia in Tulsa, OK for 49 years before retiring in 2008. On 6/20/1953 Jim married Anna Mae Saporito. They had three children together. Pamela Hicks (husband Jim), James M. (Mike) Torchia, and Teresa Bache (husband Randy) all of Pittsburg, KS. Jim and Anna Mae later divorced in 1967. On 2/16/1974 Jim married Norma (Bootsey) O'Brien. They would have celebrated their 47th wedding anniversary next month. Together they worked in Jim's practice 34 years. Jim's love of organized dentistry led him to be very active in its practices and politics. He served as President of the Oklahoma Orthodontic Society, President of the Tulsa County Dental Society, President of the Oklahoma Dental Association. He then served many years as a delegate to the American Dental Association. He was a past member of the Brookside Lions Club and a longstanding member of Southern Hills Country Club. Dr. Torchia's true love of orthodontics was evident in the happy and successful practice he maintained over the years. Treating multiple generations of families was one of his proudest achievements. He also loved to travel the world with his sweet wife, Bootsey, at his side. Together they have combed the earth learning about new and different cultures for most of their married life. Known as "Papa" by his family, he was extremely proud of all their accomplishments and wanted nothing more than to have his house full of laughter with all of his children and grandchildren. He loved fishing the White River, watching the old Columbo series on television, following OU football and eating chocolate, which was his weakness. Survivors include Bootsey Torchia of the home. Jim's three children, Pamela, Mike and Teresa all of Pittsburg, KS. Grandchildren Dr. Nicholas (Rachel) Hicks of Kansas City, MO, Emily Hicks of Tulsa, Ok., Dr. Kyle Bache of Oklahoma City, OK., and Ryan Bache of Pittsburg, KS. His sister Loretta Goldenberg of Miami, OK, a brother, Ronald (Fran) Torchia of Kansas City, MO, along with several nieces and nephews. He was proceeded in death by his parents, Jim and Edith Torchia. A brother James who died in infancy. A sister, Ann (Jim) Florio, and a brother- in- law, Charles Goldenberg. Visitation will be Monday, January 11, 2021 from 5pm to 7 pm followed by a rosary in Tulsa, OK at Fitzgerald Southwood Colonial Chapel on 91st Street in Tulsa. Funeral Mass and burial will be held at St. Bridget's Catholic Church in Scammon, KS on Friday, January 15, 2021 at 1:00 PM. In lieu of flowers, donations may be made to Catholic Charities or the University of Oklahoma School of Dentistry.

The family of Dr. James Torchia created this Life Tributes page to make it easy to share your memories.

Send flowers to the Torchia family.