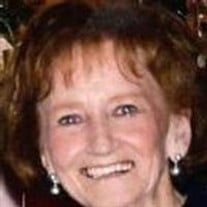 DICKSON, Jane E., 79, passed away Wednesday, May 12, 2010 in Tulsa, OK. She was born February 4, 1931 in Peck, MI to Roy A. Fletcher and Marie E. Potts Fletcher. Jane graduated from Classen High School in OKC, OK, and attended OSU, Stillwater, OK, where she was a member of Zeta Tau Alpha Sorority. She was a Manager for Foley’s/Macy’s for 20 years and was active in Church of the Resurrection as a Minister to the sick and shut-ins. She was an Oblate of St. Benedict at St. Joseph’s Monastery. She was preceded in death by; parents, son-in-law, Will Carlson, brother-in-law, Tom Ritchie and sister, Joan Marie Fletcher. She is survived by; husband, Richard “Dick” Dickson, of the home; sons, Rick Dickson (Brenda), New Orleans, LA and David Dickson (Patrick), San Francisco, CA; daughters, Deborah Lee (John), Ponca City, OK and DeAnne Carlson, Lynn Haven, FL; brother, Robert A. Fletcher, Stillwater, OK; sister, Catherine Ritchie, Sapulpa, OK, 11 grandchildren and numerous nieces, nephews, relatives and friends. Visitation will be held 8:00am – 5:00pm Friday, May 14, 2010 at Fitzgerald Southwood Colonial Chapel. A Rosary will be said 7:00pm Friday, May 14, 2010 and a Mass of Christian Burial will be celebrated 10:00am Saturday, May 15, 2010 both at Church of the Resurrection, Rev. Steve Austin officiating. Donations may be made to St. Francis Hospice, 6600 S. Yale, Suite 350, Tulsa, OK 74136. Fitzgerald Southwood Colonial Chapel, 918-291-3500. www.southwoodcolonialchapel.com

The family of Jane E. Dickson created this Life Tributes page to make it easy to share your memories.

Send flowers to the Dickson family.