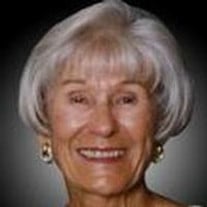 Mrs. Jeri Freeman passed away on Friday, April 16, 2010. Jeri was born on August 19, 1924 in Collins, Iowa, the daughter of Flavius and Mabel Pritchard and one of eight children. She attended Drake University in Des Moines, Iowa. She spent the World War II era serving at the Wright Patterson Air Force base in Dayton, Ohio. After the war, she worked for Texaco in Wichita, Kansas, where she met and married her husband Jim Freeman, a petroleum engineer for Texaco, on June 10, 1950. They moved to Tulsa in 1954 and were founding members of St. Mary’s Catholic Church. She was active at both St. Mary’s and Bishop Kelley High School, where she served on the Board of Directors. Jeri was very active in the “Meals On Wheels” program and was awarded the KRMG radio “Pat On The Back” for saving the life of a senior citizen recipient in 1981. A member of Philcrest Tennis Club, she took up tennis at the age of 50. She also enjoyed spending time at their home on Grand Lake in the summer and a winter residence in Longboat Key, FL. She was preceded in death by her son Greg and is survived by her husband Jim, daughters Ann and Sandy (Richard) Brook, sons Terry, Patrick and Mark (Ft. Lauderdale, FL) and sister Rosie Baird (Sun City West, AZ). Grandchildren include Jim (Heather) Brook and Jennifer (Patrick) Kelley, with great grandchildren Alexandria, Josie, Brooke, Mitaya, Connor, Grace and Peyton. A viewing will be conducted at Fitzgerald Southwood Colonial Chapel (3612 E. 91st Street) on Tuesday, April 20 from 3:00 p.m. to 7:00 p.m. Mass will be held at 11:00 a.m. on Wednesday, April 21 in St. Mary’s Church (1352 E. 48th Place, 74105). In lieu of flowers, please send donations to St. Mary’s Education Fund in honor of Greg Freeman or Meals On Wheels (12620 E. 31st, 74146). Fitzgerald Southwood Colonial Chapel, 918-291-3500. www.southwoodcolonialchapel.com

Mrs. Jeri Freeman passed away on Friday, April 16, 2010. Jeri was born on August 19, 1924 in Collins, Iowa, the daughter of Flavius and Mabel Pritchard and one of eight children. She attended Drake University in Des Moines, Iowa. She spent... View Obituary & Service Information

The family of Jeri Illa Freeman created this Life Tributes page to make it easy to share your memories.

Send flowers to the Freeman family.