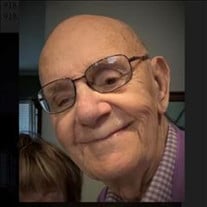 On Monday, May 17, 2021, our beloved gentle giant, Jerry McMillan Roberson, 87, of Bixby, Oklahoma passed away at Saint Francis Hospital in Tulsa, Oklahoma. Jerry is survived by his wife, Lynn D Roberson; brothers Tom Roberson (Marge) and Bob Roberson (Rose); stepchildren Paul Lucier, Gabrielle Harmening and Georgia Lucier. He is also survived by his grandchildren, Dylan Rader and Kaleb Stufflebean; step grandchildren Oliver Lucier, Reagan Adams, Madison Adams, Rosalind Lucier and Kennedy Adams; and sister in law Gyla Jones. Finally, Jerry's best buddy and fat-bottomed cat, Zoe. He is preceded in death by his children Brett Logan Roberson and Lisa Anne Rader; and brother Gene Roberson. Jerry was born on March 11, 1934 in Sharon Springs, Kansas to Lorene V Patterson and Herb R Roberson. The eldest of four boys, Jerry was the standout of the siblings towering over them at 6'4" and a size 16 shoe. His height and subsequent big feet kept him from making the football team in high school because they did not make cleats large enough to fit him, so he opted for cheerleading and drama. He was raised in a home filled with love, music, and dancing. His mother taught him to dance to the sound of big band music. This love of music and dance followed Jerry though out his life (along with his big feet), and he was constantly making lists and recordings of all his favorite music. Family gatherings, cook outs (considered a "master griller" by many), and spending time with neighbors in a gripping game of dominoes were some of Jerry's favorite pastimes. He never passed on an olive as long as it was attached to a martini, and he never met a stranger that did not become a friend. As Airport Ambassador at Tulsa International Airport, he had the opportunity to meet and greet so many people (aka new friends). Jerry graduated from the University Kansas with a Bachelor of Science in Geological Engineering in 1958. Following graduation, he worked for several oil companies and ultimately in Tulsa, Oklahoma at Kirby-Smith Machinery, where he served as Vice President of Crane Division from 1986 until his retirement in 2002. Jerry married Lynn D Lucier on January 3, 2004, and they continued to dance, together in love, until the very end of his life. One of Jerry's favorite songs was "I Wanna Dance with You", by George Strait. Knowing how much he loved to dance, we can all be sure that Jerry is two-stepping, spinning and waltzing in a place free of pain and full of joy. A Celebration of Life (and a Rumba, if Jerry had his way!) for family and friends will be held on Saturday, June 5, 2021 at 2:00pm at the Fitzgerald Southwood Colonial Chapel, 3612 E 91st Street, Tulsa, Oklahoma. Memorial donations in Jerry's name may be made to Street Cats Inc. in Tulsa, Oklahoma, and St. Jude Children's Research Hospital.

The family of Jerry McMillan Roberson created this Life Tributes page to make it easy to share your memories.

Send flowers to the Roberson family.