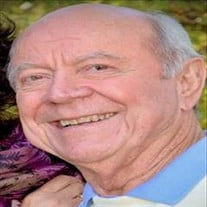 Jesse Blake Partain known as J.B. or Blake was born in Ione, Arkansas. He passed away July 8, 2021 in Tulsa, OK. J.B. grew up in Ione and Booneville, graduating from high school in Booneville. He was one of seven children of Mollie Viola Dill Partain and Jesse Leonard Partain. His siblings Leonard, Ina Grace, Autrey, Irma, Laura and Rose Mary preceded him in death. He was fortunate to have two enduring loves in his life. He married Elaine Franke in 1948. She passed away in 2009. He married Maria Mercedes Abalos in 2010. She survives him. He is also survived by his children, Shari L. Gunn, Denise L. Thornton, Blake R. Partain, Bruce R. Partain and Sandra E. Partain. His legacy also lives on through his seven grandchildren and ten great-grandchildren. J.B. played football and basketball for the Booneville High Bearcats, and for the Arkansas Tech Wonderboys. He once hitchhiked to Fort Worth to work a summer job at a wire rope facility, figuring the hard work would get him in shape for football. He served in the United States Navy just after World War II, and again during the Korean Conflict, earning the rank of Petty Officer. His stories of working logistics as a SeaBee construction battalion on small islands in the South Pacific and in Japan, could easily have made dramatic/comedic scenes in motion pictures. He left Arkansas Tech after just one year, having done well as a chemical engineering student, but running short on funds to continue his studies. J.B. then worked in Shreveport, La., managing circulation for the Arkansas Democrat newspaper. His long career with DuPont began in Tulsa, starting as a technician in the antiknock testing lab. His lifelong desire to succeed and his fearless attitude of approaching and challenging authority led to a junior sales position in Ponca City, OK. Largely self-taught in chemistry, he won business for DuPont by learning more about refining than many of the degreed engineers who were his customers at Conoco, Cities Service and Phillips. A five-year stint in Billings, Montana combined his love of the outdoors with the opportunity to cover a huge territory that was also known as superb trout fishing country, including in and around Yellowstone National Park. No sales trip to a distant refinery started without fishing rods in the back of the vehicle, and no trip ended without a full freezer of fish for his growing family back in Billings. He continued with DuPont back in Tulsa, then on to posts in Delaware, California and Houston. He and son Blake started a consulting company in Tulsa in the 1990s Recycle, Inc. taking the opportunity to safely dismantle and dispose of the large antiknock tanks that previously held the products he sold for DuPont. He was required to pass engineering exams in several states to operate his company, and he did so without much difficulty. Working well into his 80s, J.B. exemplified the can-do spirit of his generation. A graveside service is set for 10 a.m., Wednesday, July 21 at Tulsa's Calvary Cemetery, under direction of Fitzgerald Southwood Colonial Chapel.

Jesse Blake Partain known as J.B. or Blake was born in Ione, Arkansas. He passed away July 8, 2021 in Tulsa, OK. J.B. grew up in Ione and Booneville, graduating from high school in Booneville. He was one of seven children of Mollie Viola Dill... View Obituary & Service Information

The family of Jesse Blake Partain created this Life Tributes page to make it easy to share your memories.

Jesse Blake Partain known as J.B. or Blake was born in Ione,...

Send flowers to the Partain family.