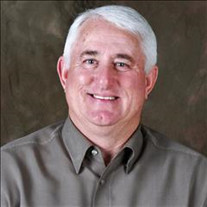 This world lost a really good man in Jim Craig, another victim to this horrific disease, COVID-19. Jim resided in Broken Arrow, OK with the love of his life, Lisa, to whom he had been married 55 years. He is survived by his son, Bryan Craig, who lives in Bentonville, AR with his wife Missy, and their children: Natalie, Annie, Isabelle and Meredith. His son, Steve Craig, from Tulsa, OK with his wife Michelle, and their children: Mitchell, Macy, Mark, Micah and Mary Cate. His daughter, Susan Craig-Greene, who lives outside London, England with her husband Matt, and their children: Sam, Molly and Lily. He also has a brother, Dan Craig, from Omaha, NE and a sister, Sherry Collins, from Neosho, MO. One of the greatest joys in Jim's life was his marriage to Lisa, who he met when they were just teenagers in Joplin, MO. This started a love affair that would last a lifetime. They were best friends, and they enjoyed life together. They had three kids, Bryan, Steve and Susan. Jim loved serving his family, making them his top priority. He was always coaching his kids' sports teams and enjoyed teaching his kids about life skills and helping them with schoolwork and projects. He also was an avid hunter and fisherman and golfer, and he loved sharing these passions with his kids whenever possible. When his kids gave him grandkids, he became "Paw Paw" or "Pops" and discovered a whole new level of earthly joy. He relished being a part of his grandkids' endeavors, whether it be sports or dance or singing. And the family knew how much Paw Paw loved playing board games or cards, and the family always enjoyed times around the game table. Jim also had a very satisfying and successful career. He graduated from Kansas State College in 1968 with a degree in Industrial Technology and worked as an Engineer for Cessna Aircraft Company in Wichita, KS and at Lewis Corporation in Tulsa, OK. Then, he got a job as a Design Engineer at a small (at the time) manufacturing company, McElroy Manufacturing, where he would spend the next 40 years of his career until his retirement in 2013. While at McElroy, Jim was involved in much of the design and re-design of some of their earliest products. Then, Jim became the National Sales Manager, directly involved in growing the company and working with key distributors. This became the source of many great friendships that he treasured. When he transitioned to Industry Relations, he was able to lend his gifts and his vast knowledge to help the entire Fusion industry. He served as chairman of the task groups that developed many standards that are used today. In 1993, Jim was proud to achieve the status of Professional Engineer. Within the industry, he received a multitude of awards and recognition. The McElroy family was always very special to Jim, and he was so thankful for the many opportunities and support they gave him through the years. Jim was loved and respected by all his work peers all over the country. Jim Craig was a man who loved God, loved his family, loved his work and loved life. He will be sorely missed by so many, but he built an enduring legacy that will live on in his family, with his friends and in his industry. Jim will be honored at a Vigil Service on Wednesday, November 11, at 6:00 PM and at a Mass of Christian Burial on Thursday, November 12, at 11:00 AM. Both services will be held at The Church of Saint Mary, 1347 E. 49th Pl, Tulsa, OK. In lieu of flowers, you can make a donation to Jim's favorite charity, Catholic Charities. https://cceok.org/ The Thursday Mass will also be Live-Streamed so you can watch it at https://www.youtube.com/channel/UCpDN3mzuA9DfGxu_f2YJCQg For those attending the services, the family requests that Masks be worn.

This world lost a really good man in Jim Craig, another victim to this horrific disease, COVID-19. Jim resided in Broken Arrow, OK with the love of his life, Lisa, to whom he had been married 55 years. He is survived by his son, Bryan Craig,... View Obituary & Service Information

The family of Jim M. Craig created this Life Tributes page to make it easy to share your memories.

This world lost a really good man in Jim Craig, another victim...

Send flowers to the Craig family.