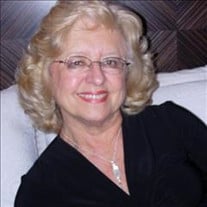 Joan M. Wirt passed away Friday morning, September 24 after a battle with Alzheimer's that lasted more than a decade. She moved on to her new life peacefully, in the presence of God and family. Joan was born in Oklahoma City on July 21, 1936 and was preceded in death by the love of her life Joseph Philip "Phil" Wirt, Jr. in 2001, mother Lena in 1993 and father Aloysius Magerus, 2000; her sister-in-law Betty Thompson in 2012 and her husband Richard in 2004 of Yukon, OK. She is survived by sister Mary Wedman and husband Don of Yukon, OK; brother John and spouse Everett of La Crosse, WI; son Jeff and wife Debbie of Tulsa, OK; son Mark and wife Angela of Grayson, GA; son Jim and wife Kim of Stilwell, KS; son Tom and wife Caroline of Overland Park, KS; granddaughter Ashley and husband Weston of Pittsburg, KS; grandson Justin and wife Vanessa of Tulsa; granddaughter Jennifer of Los Angeles; grandson Gregory of Overland Park; grandson Joseph of Atlanta, GA; granddaughter Madeline and husband Korbin of Overland Park; grandson Stephen of Tulsa; grandson Andrew of San Antonio; grandsons Landon and Shae of Overland Park; and great grandchildren Camden, Audrey and Decker. She is also survived by nieces and nephews of the Thompson and Wedman families. Joan was graduated from Oklahoma City's Mount Saint Mary's High School in 1954, where she was the first and only female in the all-boys advance Math-class she proceeded to attain the highest grade in the class. She was married to Phil Wirt in 1957 and moved to Tulsa. There she worked for Dale Toedt and Associates and Blue Cross and Blue Shield of Oklahoma as an executive secretary. She retired in 2005. Joan loved her high school and in 2008 was instrumental in having the football field renamed after the school's first athletic director, Father Kenneth Fulton. And, of course, there was a party. Joan loved what she did for a living and consistently amazed her family with how fast she could type (especially if it was a term paper due the next morning). She was very involved in the Tulsa Chapter of the International Association of Administrative Professionals, serving as president from 2003 to 2005. She was outstanding member of the year in 1995. Joan also loved to learn and challenge herself. She went back to school in her late 50s and earned her Associates Degree in applied science in 1997. Joan was a faithful member of the St. Pius X church and school community for decades, volunteering for everything from Cub Scout den mother to lector. She also helped coordinate church women's club funeral meals for many years after her retirement. Joan will be missed by family and friends. We thank the caregivers who appreciated her and had patience with her (and played Wii bowling with her). We pray she will be reunited not only with friends and family but her memories as well. Visitation will be at Fitzgerald Southwood Colonial Chapel from 5 to 7 p.m. on Thursday, September 30. A rosary will be prayed starting at 7 p.m. A funeral Mass in Joan's honor will be held Friday, October 1 at 1 p.m. at St. Pius X Catholic Church, 1727 S. 75th E. Ave., Tulsa, OK. In lieu of flowers, donations may be made to the Phil & Joan Wirt Scholarship fund c/o St. Pius X Catholic School, 1717 S. 75th E. Ave, Tulsa, OK, 74112 or the Alzheimer's Association.

Joan M. Wirt passed away Friday morning, September 24 after a battle with Alzheimer's that lasted more than a decade. She moved on to her new life peacefully, in the presence of God and family. Joan was born in Oklahoma City on July 21, 1936... View Obituary & Service Information

The family of Joan Margaret Wirt created this Life Tributes page to make it easy to share your memories.

Joan M. Wirt passed away Friday morning, September 24 after a...

Send flowers to the Wirt family.