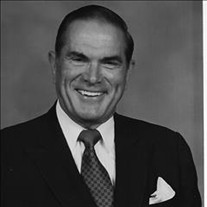 John Raymond Arend John Raymond Arend, 89, a long-time resident of Tulsa, passed from this life and into the presence of our Lord on Saturday, April 25, 2020 after a courageous struggle. He was born in Taylor, Texas on January 5, 1931, a single child born to John and Marie Arend. John attended college at Texas Christian University, earned his law degree at the South Texas School of Law, the FBI Academy and later the Harvard Business School. He was also a member of the Texas and American Bar Associations. Growing up during the depression in the small town of Taylor, Texas, John got his start in business selling Liberty Magazines for a nickel each at age 7. After working his way through law school, he attended the FBI academy and served on the West Coast for over 10 years as a special agent. One of the most notorious cases he worked involved three escapees from Alcatraz, later becoming the hit movie, "Escape From Alcatraz," starring Clint Eastwood. John then accepted a job with Continental Oil Company in Houston, and worked as an international troubleshooter. It was during this time that he met and married the love of his life, Tricia. In 1971, John and Tricia moved their family to Tulsa working as Vice-President for Agrico Chemical Company and the William's Companies before starting his own company, International Chemical Company, in 1976. John was loved dearly by his family, co-workers and friends from all over the world. He was smart, generous, thoughtful and had a wonderful sense of humor. John firmly believed in the power of positive thinking and nearly everyone who knew him will fondly recall his familiar response when asked how he was feeling: "Marvelous But Improving." He will be lovingly remembered as a wonderful father, grandfather, great-grandfather, uncle, cousin, friend and role model to so many. This larger-than-life man will be remembered and missed by everyone who knew him. John was a long-time member of Southern Hills Country Club and was active with Asbury Methodist Church. John was preceded in death by his wife, Tricia Arend and is survived by his children, Tiffany and Stuart Campbell of Tulsa, Denny Arend and Donelle Allen of Tulsa, and John Arend of Tulsa; his grandchildren, Patrick and Shana Arend of Tulsa; step-grandchildren Sarah, Spencer and Sawyer Campbell of Tulsa; his great-grandson, Madden Arend of Tulsa; and will be forever loved by many wonderful friends and extended family throughout the world. The family is grateful for the compassionate care John received from his beloved caretakers in his final years. A celebration of John's life will be held at a later date. Friends can honor John's memory with donations to the Humane Society of Tulsa at www.tulsapets.com .

John Raymond Arend John Raymond Arend, 89, a long-time resident of Tulsa, passed from this life and into the presence of our Lord on Saturday, April 25, 2020 after a courageous struggle. He was born in Taylor, Texas on January 5, 1931, a single... View Obituary & Service Information

The family of John R. Arend created this Life Tributes page to make it easy to share your memories.

Send flowers to the Arend family.