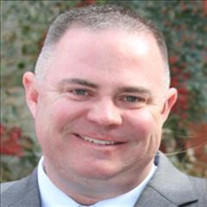 John M. Carey III, 42, passed away Saturday, May 23, at his home in Tulsa, Oklahoma. He left this world and his beautiful family far too early. A loving husband, father, son, brother and friend, John will be missed by so many. John grew up in Pensacola, Florida and Charleston, South Carolina. He graduated from Pensacola High School in the International Baccalaureate Program. Growing up, John ran cross country and was an active member of the Boy Scouts of America, earning his Eagle Scout, the highest achievement attainable in the scouting program. John went on to the University of Florida and earned his degree in Chemical Engineering. He was a member of the Sigma Nu fraternity and met his wife Jenifer while in college. After graduation, John worked in various engineering, safety and environmental roles at engineering, design and construction firm URS Corporation and Tulsa-based Williams. John and Jen married in 2009. John loved spending time with his family. He especially enjoyed being involved with Cub Scouts and teaching his young son, Jay, about the outdoors and camping. As a senior engineer at Williams for the past seven years, John never hesitated to take on a new project. When he joined Williams, he became involved with the company's United Way campaign committee. For the last several years, he co-chaired the company's participation in the Tulsa Area United Way's Day of Caring. In 2019, Williams had more Day of Caring volunteers than any other company in Tulsa, thanks to John's leadership and strong organizational skills. John is survived by his wife, Jenifer and son, Jay; parents, Christi and John "Jack" Carey, Jr. of Orlando, Florida; brother Joshua and sisters Aimee and Caitlin Eslinger and her husband Travis; grandfather Robert Haavig of Chicago, Illinois; Jen's parents Jane and Raymond Siedlarz of Tampa, Florida and grandmother Betty Sumner of Hamden, Connecticut. Funeral arrangements are being handled by Fitzgerald Funeral Home. In lieu of flowers, the John M. Carey III Memorial Fund has been set up for the family at .

John M. Carey III, 42, passed away Saturday, May 23, at his home in Tulsa, Oklahoma. He left this world and his beautiful family far too early. A loving husband, father, son, brother and friend, John will be missed by so many. John grew up... View Obituary & Service Information

The family of John Michael Carey, III created this Life Tributes page to make it easy to share your memories.

Send flowers to the Carey family.