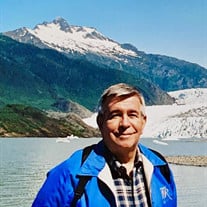 Captain John William Conwell, IV (Supply Corps, USNR Ret.), 79, was born in Jersey City, New Jersey on March 1, 1943 to John W. Conwell, III and Bessie Mae Conwell. John graduated from Central High School and earned his Bachelors at the University of Tulsa. John proudly served in the United States Navy and as a Supply Officer in the Naval Reserve for over 26 years. He served aboard the Aircraft Carrier USS Shangri-La (CVA-38) for 3 years until he left active duty, and continued to serve in the Naval Reserve until his retirement in 1992. After serving active duty, John went back to the University of Tulsa and earned his MBA. John was a CPA, and worked as an accountant in various roles, including Controller and CFO, before retiring. In 1988 John married the great love of his life, Judy Cooper. They would spend the next 34 years living a life of love, laughs, and adventure. Together, they enjoyed camping at various National Parks, hiking, white water rafting, and the occasional horseback ride in the mountains. He loved going on cruises, more for just being out to sea than visiting the different ports. John was a collector of cats from a young age, preferably Siamese, but he really wasn't too picky. In the 80's, when his son started bringing home strays, he begrudgingly started collecting dogs as well. Together, John and Judy would never say no to helping an animal in need. John was a great lover of classical music. During grad school he played the oboe with the Tulsa Philharmonic. While in the Navy he had the opportunity to visit the great opera houses in Europe. John tried to pass on his love of opera to his children, but it never took. John was also a lover of knowledge. He was passionate about topics such as space, meteorology, technology, economics, and philosophy. He believed that one should never stop learning, and as such also loved sharing knowledge with the people he cared about. John is survived by his beloved wife, Judy Cooper-Conwell; daughter, Kimberly (Stacy) Conwell-Leigh; son, John (Diane Kitano) Conwell; stepsons, Jon Cooper and Andy Cooper; his brother, Jene (late Janis) Conwell; four grandchildren; many nieces and nephews; as well as his precious dog, Lil Girl, and cats, Tommy and Lucy-Mae. There will be a Celebration of Life for John on March 26th, 2022, at 11:00 am, at the Inola United Methodist Church. Please come share thoughts and memories, to celebrate a life well lived. In lieu of flowers, please consider a donation to either the Alzheimer's Support Group at Broken Arrow Seniors (www.baseniors.org/donate-now.html ) or Amedisys Hospice Care (www.amedisys.com/about/foundation/ ) Fitzgerald Ivy Chapel, 918-585-1151

The family of John William Conwell, IV created this Life Tributes page to make it easy to share your memories.

Send flowers to the Conwell family.