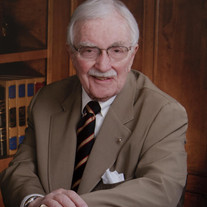 John Markham "Jack" Freese, Sr. passed peacefully in his sleep, surrounded by his two sons and wife - the ones who loved him most - at 1:45 a.m. Saturday morning, November 20, 2021. Born February 12, 1928 at St. John Hospital in Tulsa, Jack... View Obituary & Service Information

The family of John Markham Freese, Sr. created this Life Tributes page to make it easy to share your memories.

Send flowers to the Freese family.