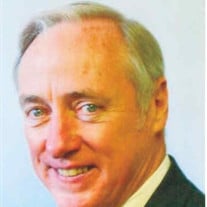 John B. Jarboe passed on to eternal rest with the Lord on May 1, 2022 after a long, courageous battle with cancer. John was born in Tulsa, Oklahoma on March 28, 1940 to Joseph R. and Mildred Maguire Jarboe. He was the youngest of three children,... View Obituary & Service Information

The family of John Bruce Jarboe created this Life Tributes page to make it easy to share your memories.

John B. Jarboe passed on to eternal rest with the Lord on May...

Send flowers to the Jarboe family.