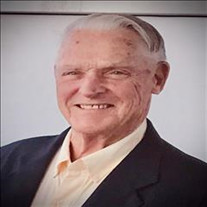 John Raymond Jaris, Jr., 78, died Friday, August 28, 2020, at his home in Dustin, Oklahoma. John was born on April 18, 1942 in Houston, Texas to John Raymond Jaracezski, Sr. and Meda Elvira Morris. He attended Catholic schools in Houston before graduating Texas A&M in 1964. He proudly volunteered to serve in Vietnam in the Corp of Engineers attaining the rank of 1st Lieutenant before returning home to Houston to meet and marry his wife, Carolyn Jo Bryant, in 1968. In 1980, John and his wife moved to Tulsa, Oklahoma with their three children. For 34 years, he worked in commercial construction for Linbeck in Houston, Texas and Manhattan in Tulsa, Oklahoma as a Senior Project Manager. Some of John's projects include the Almeda Mall in Houston, St. Mary's Hospital in Galveston, Eton Square Mall in Tulsa, the University Center at Tulsa, and the Veterans Administration Hospital in Muskogee. John retired from construction at age 55 and in 2004 began his second career as a cattle rancher in Dustin, Oklahoma. John and Carolyn also managed their own residential real estate company, Jaris Investments Company, with 15 rental properties. John had a passion for designing and building his own homes. In 1976, he converted a detached garage of his Houston duplex into a three-story townhouse in the Rice University area and for the last fifteen years, he has been transforming a Sears Roebuck Catalog kit house into a Tuscan-style villa on his 515-acre ranch. When John paused from work, he enjoyed reading, researching genealogy, watching movies and spending time with his family. His greatest leisure was camping and fishing with family and friends. On his IfICanRanch, he ran a herd of 50 cattle and raised many ducks and chickens. He created several ponds and built a 7-acre lake. He enjoyed fishing, canoeing, paddle-boating and picnicking with his grandchildren on his Running Dog Lake. He is predeceased by his parents and infant daughter, Jessica. He is survived by his wife Carolyn, of 52 years, and children, Michael Jaris of Tulsa, Nancy Jaris of Dallas, and Joanna and Nick Bartel of Dallas. He has 4 grandchildren, Sparrow and Starling Jaris of Tulsa, Kathleen and Nicholas Bartel of Dallas. He is also survived by his brother, Edward Jaris of Dickenson, Texas, nephew and nieces, Chris and Sherri Jaris, Melisa Jaris and Carol Harris, and 4 great-nephews, Andrew and Daniel Jaris, Christopher and Nicholas Harris. Visitation will be at Fitzgerald Ivy Chapel, Tulsa on Thursday, Sept 3rd from 10-6. Funeral Mass will be at Christ the King Catholic Church, Tulsa, on Friday, Sept 4th at 11:00 with burial at Calvary Cemetery and reception following. The family will host an open house reception at the ranch on Saturday afternoon. Fitzgerald Ivy Chapel, 918-585-1151

The family of John Raymond Jaris, Jr. created this Life Tributes page to make it easy to share your memories.

Send flowers to the Jaris family.