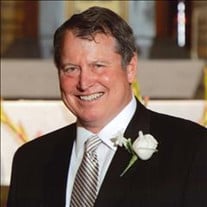 John Donald Tierney, II July 2, 1958 - November 3, 2021 John Donald Tierney (Don) was born in Staten Island, NY to Barbara Crane Tierney and the late John Donald Tierney. He was the oldest of six children. His family moved to Morristown, NJ where he spent his formative years. He graduated from Delbarton School in 1976. Don received a business degree from Niagara University in 1980 and went on to receive a Petroleum Engineering degree from Oklahoma State University in 1989, at which point he became a Cowboy for life. Go Pokes! Don spent the majority of his career with Tolkan Oil and Gas and finished his career at Ram Energy as a Senior Operations Engineer. He had a strong work ethic and spent many long hours traveling and working in the oil fields of the midwest. Don had the good fortune to marry the love of his life, Mary Ellen. They became a wonderful family with her two children, Kellie and David. They enjoyed traveling and going on adventures, but were happiest with family and friends. Don loved gourmet cooking, grilling and most of all, inviting friends for barbeques and OSU Football on Saturdays. Don will be most remembered for his good humor, story telling, selflessness and toughness. He enjoyed many lifelong pursuits such as skiing, hunting, fishing, sailing and camping. One of his favorite activities was cycling with his local bike club and riding in the RAGBRAI in Iowa and the MS 150 Bike Ride, where he always met with good friends, epic challenges and great revelry. Don shared many adventures with his faithful dogs. Despite living in the Southwest, he never gave up his love for his teams, the NY Giants and the NY Yankees. He is survived by his wife Mary Ellen Tierney, Stepson David Schulte, wife Sarah and their children Trevor, Carter and Cameron, Stepdaughter Kellie Zahn, husband Brian and his children Carson and Campbell. Don is also survived by his mother Barbara Tierney, siblings Erin Plante, husband Robert and their children Alice, Timothy and Owen; Patrick Tierney, wife Denni and their children Kaleigh, Shane and Caden; Tara Ramsey, husband Richard and their children Noreen, Molly and Maura; Kelly Dyke, husband Richard and their children Kiley, Jack and Lexie; and Christopher Tierney and wife Peggy. He is also survived by many aunts, uncles, cousins, in-laws and friends, many who called him by his nickname "Bubba," a term of endearment given to him as a young boy. He is predeceased by his father, John Donald Tierney. There will be a Rosary Vigil at 6:00 PM on November 10th at Southwood Colonial Chapel (3612 E 91st, Tulsa). There will be a Mass of Christian Burial on November 11th at 10:00 AM at Church of the Madalene (3188 E 22nd St, Tulsa), after which a Graveside Service will be held at Calvary Cemetery (91st and Harvard, Tulsa). Funeral services provided by Fitzgerald's. In lieu of flowers, donations in Don's memory can be made to Catholic Charities of Eastern Oklahoma, PO Box 580460, Tulsa, OK 74158 or online at cceok.org.

The family of John Donald Tierney II created this Life Tributes page to make it easy to share your memories.

Send flowers to the Tierney family.