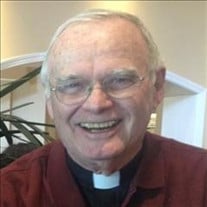 Fr. John J. Wade, a retired priest of the Roman Catholic Diocese of Tulsa and Eastern Oklahoma, died peacefully on December 20, 2021, ten days short of his 91st birthday. His brother Steve was at his bedside. He had celebrated his 65th anniversary of priestly ordination earlier this year. Born on December 30, 1930, in Duncan, Oklahoma, John Joseph Wade was the oldest of three sons born to William and Muriel (Horscheler) Wade. Growing up in Oklahoma City, he earned a Bachelor's Degree in Education at the University of Oklahoma. He attended the St. Louis Preparatory Seminary and St. John Home Mission Seminary in Little Rock, Arkansas, in preparation for the priesthood. He was ordained on May 26, 1956, at Our Lady of Perpetual Help Cathedral in Oklahoma City. His younger brother Jarrel became a priest in the Society of Jesus (Jesuits), becoming a missionary in Central America. Fr. Wade served in various parish assignments in Oklahoma, including St. Francis Xavier (Enid), St. Mary (Ardmore), St. Cecilia (Healdton), St. Francis Xavier (Sulphur), St. Mary (Guthrie), St. Joseph (Buffalo), Holy Name (Shattuck), Our Lady of Victory (Purcell), St. John the Baptist (Lexington), as well as St. Jude, Our Lady of Guadalupe and Sts. Peter & Paul (Tulsa). When the Diocese of Tulsa and Eastern Oklahoma was established in 1973, he became its first Officialis (Judicial Vicar), responsible for the Marriage Tribunal. He retired from that role in 1999. Fr. Wade was also a member of the Presbyteral Council and the Board of Consultors. For 25 years he was a priest chaplain at St. John Medical Center. Retiring from active ministry in 2002, he was later chaplain to Our Lady of Sorrows Convent in Broken Arrow, St. Joseph Monastery and Monte Cassino School in Tulsa. An avid golfer, he traveled extensively, and maintained a lifelong desire for learning. Late into life Fr. Wade continued the study of theology and philosophy. Known for his gentle and quiet demeanor, his attitude towards the priesthood was simple. He said, "I was not called to be successful in the Church. I was called to be faithful." A special word of thanks to those who cared for Fr. Wade is recent years. They include Ralph and Mary Anne Axsom, Bart and Beth Bartholomew, Bart Cronin, Deacon Dave Johnson, the staff of the Franciscan Villa, Cearu Medical Resort and Porta Caeli House. He is preceded in death by his parents William and Muriel, and his brother Jarrel (Padre Patricio) Wade, S.J. He is survived by his brother Steve of Oklahoma City, extended family, and by his brother priests of the Diocese. There will be a Wake Service for Fr. Wade on Tuesday, December 21 at 7:00pm at Holy Family Cathedral in Tulsa. His Funeral Mass will be on Wednesday, December 22 at 10:00am, also at Holy Family, with Bishop David Konderla presiding. Burial will be at Calvary Cemetery. In lieu of flowers, donations can be made in Fr. Wade's name to Catholic Charities of Eastern Oklahoma, as well as the Retired Priest Fund of the Diocese of Tulsa & Eastern Oklahoma. Fitzgerald Ivy Chapel, 918-585-1151

Fr. John J. Wade, a retired priest of the Roman Catholic Diocese of Tulsa and Eastern Oklahoma, died peacefully on December 20, 2021, ten days short of his 91st birthday. His brother Steve was at his bedside. He had celebrated his 65th anniversary... View Obituary & Service Information

The family of John Joseph Wade created this Life Tributes page to make it easy to share your memories.

Send flowers to the Wade family.