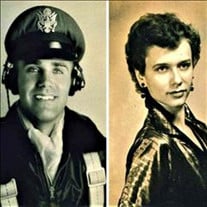 John Marshall Wheatley, loving husband and father, died June 12, 2020, in the comfort of his home in Tulsa, OK at the age of 91. He was born on October 4, 1928, in Detroit, MI to Marshall Arthur and Edith Gertrude Wheatley. John attended high school in Lansing, Michigan, after finishing high school, John went on to receive a mechanical engineering degree from the University of Michigan. John finished his college education at the University of Michigan. After college, John joined the United States Air Force. During training, John met Patricia Lou Jackson. They were married on July 4, 1953 and moved to Burlington, VT. He served as a 1st Lieutenant during the Korean War. After his discharge from military service he went to work at Hughes Aircraft, Culver City, California as a test pilot. They went on to raise four children in Tulsa, OK. John started and later sold a manufacturing plant producing industrial louvers and light poles. He also had a passion for classic cars. Patricia Lou Jackson of Tulsa, Oklahoma was the adopted daughter of Walter F. and Alice E. (Poole) Jackson. She was born April 28, 1933 in Grand Rapids, MI. One of her favorite things to do growing up was to ride in competition with her horse Nellie. Patricia attended Hawkaday, a woman's private school in Dallas, TX . After raising four children at the age of 80 she passed on to heaven on October 13, 2013. John joined her in heaven with their savior Jesus and family that preceded them. John was preceded in death by his wife, Patricia, and two sisters, Barbara and Janet. He is survived by his four children: Ellen and husband Lee Tarrant, Edward Marshall, John Mark and girlfriend Renee Bussell and Curtis Ross; one nephew, Marshall Lane Gildermaster; four nieces, Lark, Gail, Lura Beth, and Lynette; two grandchildren, Marshall Asa and Rachel Lee; Psalms 91 John 14: 1-6 A visitation will be held 6:00-8:00 p.m. Wednesday with funeral service: 10:00 a.m. Thursday, both at Fitzgerald Southwood Colonial Chapel, 918-291-3500.

John Marshall Wheatley, loving husband and father, died June 12, 2020, in the comfort of his home in Tulsa, OK at the age of 91. He was born on October 4, 1928, in Detroit, MI to Marshall Arthur and Edith Gertrude Wheatley. John attended high... View Obituary & Service Information

The family of John Marshall Wheatley created this Life Tributes page to make it easy to share your memories.

Send flowers to the Wheatley family.