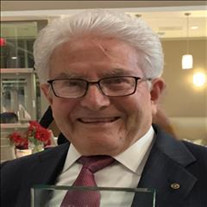 Dr. Jose R. Medina of Tulsa passed away on March 2, 2021 at age 86. His life story is one of family, faith, and hard work to make his American dream a reality. The son of Jose and Enriqueta Medina of Ecuador, he was raised in the small town of Saquisili and then Quito, Ecuador. He and his brothers and sisters, Ligia Quintana, Nelson Medina, Edgar Medina, and Elvia Barahona enjoyed the closeness of family throughout their lives. Jose moved to the United States in 1963 to continue his medical education at the University of Minnesota. Just before his move, he married the love of his life, Laura, a nurse he met in the hospital, and they recently celebrated their 58th wedding anniversary. Laura and Jose supported each other through his training as a cardiologist and service as an Army officer and physician in Colorado. They ultimately settled in Oklahoma, but held on to their love of travel. Together they raised four children, Lauri, Joe, Patricia, and Steven. While Jose tried many different hobbies throughout the years, photography was one of his true passions. He loved taking family pictures and stood on the sidelines of his children's games, capturing endless special moments on film. He also welcomed Laura's mother to their home, and together they nurtured beautiful rosebushes. His bookshelves were heavy with biographies, political commentary, and tales of American history. Neighbors and co-workers became life-long friends enjoying dinners, good wine, and parties filled with laughter and dancing into the night. He had a sweet tooth, which he satisfied with many teaspoons of sugar in his morning coffee, but he wouldn't eat vegetables unless a grandchild offered him a bite. He embraced American traditions ranging from Friday night football to delicious Thanksgiving dinners. Jose's spirit of community was reflected in his dedication to his patients during his working years and after retirement as a volunteer at the Xavier Medical Clinic. He was proud of his service as a Rotarian and was honored as an Augustinian Affiliate. He supported various civic organizations as well as the Catholic Church and its charitable mission. He inspired generations of medical students in the profession he loved. For his work he received many teaching awards and was recently honored with the Dr. Jose Medina Heart of Gold Award from the OU-Tulsa School of Community Medicine for contributions to the field of cardiology and the Tulsa community. Jose was a strong supporter of education, given that his own opened so many doors for him. Jose will be remembered by his children and their spouses, Lisa (Peters), Brian Collins, and Kelly (Reel), for his unconditional love toward them. His nine grandchildren and one great grandchild, also felt that love while falling asleep in his arms in their early days. He delighted in watching his children and grandchildren in the swimming pool and loved for them to stay at his home over the years. His legacy will be these younger generations - grandchildren Jessica and her partner Seth Schuster, Joey, Nick, Chris, Logan, Kai, Kiana, Ashley, and Alex, and great-grandchild Adam. They will carry forward his love, optimism, and generous spirit. Visitation will be held at St. Rita Chapel at Cascia Hall Preparatory School, on Monday, March 8 at 5:00 p.m., with the Rosary to follow at 6:00 p.m. The funeral Mass will be held at 10:00 a.m. at Christ the King Church, on Tuesday, March 9, followed by interment at Calvary Cemetery. Friends can honor Jose's memory with a contribution to Cascia Hall Preparatory School, the John 3:16 Mission in Tulsa, or the Ascension St. John Foundation. Click HERE to see the recorded livestream of the funeral mass. Fitzgerald Ivy Chapel, 918-585-1151

Dr. Jose R. Medina of Tulsa passed away on March 2, 2021 at age 86. His life story is one of family, faith, and hard work to make his American dream a reality. The son of Jose and Enriqueta Medina of Ecuador, he was raised in the small town... View Obituary & Service Information

The family of Jose Rodrigo Medina created this Life Tributes page to make it easy to share your memories.

Send flowers to the Medina family.