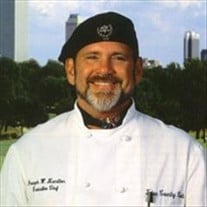 Joseph Ward Hamilton was born on June 12, 1951 in Rochester, New York, to John Frederick Hamilton and Eleanor Lyle Hamilton Cushing, and he died most unexpectedly on April 12, 2020. Joe graduated from Irondequoit High School in Rochester in 1969, and then served honorably "at the pleasure of President Nixon" in the Army Quartermaster Corps�the unit for bakers, chefs, and other food service personnel. This began a long life of creativity expressed primarily in the culinary arts! After leaving the army, he attended the Culinary Institute of America in Hyde Park, New York, an accomplishment of which he was very proud. He then moved to Oklahoma City to teach in a local culinary program and then on to a long career in "all things food" in Tulsa. This career took him from Joe's Grill -his own business- to multiple fine dining locations in Tulsa. He spent almost 12 years as the executive chef at Tulsa Country Club, then several years as the executive chef at St. John Medical Center, and then on to the Silo Event Center where he brought the dreams of many a bride to fruition. In all these efforts, he was the epitome of the gracious host, making everyone comfortable and at home wherever he served. His sense of humor was always a buffer to help staff and guests through difficult moments and to create an atmosphere of graciousness and personal attention. But that was the professional side of Joe Hamilton. For his family and friends, Joe was a true Renaissance man. He loved so many things and always to excess! Joe was an avid cyclist, riding in the Triple Bypass 5 times! He cooked for his very large family and our many delightful dinner parties. He and his family hiked all over Colorado, to Machu Picchu, in Germany and Austria, dived in Mexico, and were stopped from walking the Camino de Santiago in Spain by the Corona virus. Joe was our butcher, baker, kitchen consultant, chef extraordinaire, plumber, construction foreman, mover, driver, lumberjack and DJ to name a few. He was a father and grandfather and he loved his wife fiercely. They travelled the world together. After retirement from the Silo, he volunteered for Revitalize T-Town, making home repairs and at Iron Gate, feeding the homeless. He was in the planning stages for a program for teens and young adults, preparing them with the culinary and life skills they would need to gain entry into the culinary industry. Joe was always looking for a way to serve. He is survived by his wife, Katie Hamilton; daughter, Jessica Hamilton (Billy); step-children, Mark Rolston (Renae), Eric Rolston (Kim), Ryan Rolston (Christina), and James Rolston; and 5 grandchildren, Colin, Ronan, Annika, Gus and Dot, along with a host of cousins, nieces and nephews. His sudden passing has created a hole in our hearts and an intolerable grief. We will miss him so very much. A private family ceremony will be held now and we hope to hold a gathering in the future to celebrate the life of this man we love. In lieu of flowers or gifts, Contributions would be encouraged to the programs that Joe was passionate about. Those programs include Iron Gate of Tulsa, Community Food Bank of Eastern Oklahoma and Revitalize T-Town. Fitzgerald Ivy Chapel, 918-585-1151

Joseph Ward Hamilton was born on June 12, 1951 in Rochester, New York, to John Frederick Hamilton and Eleanor Lyle Hamilton Cushing, and he died most unexpectedly on April 12, 2020. Joe graduated from Irondequoit High School in Rochester in... View Obituary & Service Information

The family of Joseph Ward Hamilton created this Life Tributes page to make it easy to share your memories.

Send flowers to the Hamilton family.