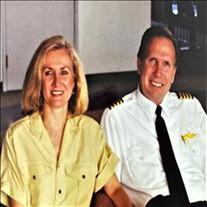 Joe Hilley, 68 died January 2nd, 2021 in Tulsa, Oklahoma. Joe was born April 21st 1952 in Long Beach, California. His family later moved to Lompoc, California where he grew up. He was preceded in death by his parents Frank and Helen Hilley. He is survived by his wife Cheryl, three sons and their spouses Dustin and Camilla of Las Vegas, Christopher and Sara, grand-daughter Halle and grandson Sean of Tulsa, and Micah and Angela of Oklahoma City, as well as his sister Marylois Hilley Little and husband Gene of Jasper, Arkansas, and nieces, nephews and cousins. Joe accepted Christ in 1976 and was a committed Christian all his life. Joe and his wife Cheryl were married 43 years and he always said "I hit a home run when I married her." An accomplished pilot, Joe amassed more than 22,000 accident-free flight hours in all types of aircraft, including the DC-10. He began his career by serving in the U.S. Navy achieving the rank of Aviation Storekeeper 2nd class. Joe was a Vietnam Veteran, and was attached to Aviation Attack Squadron 55, which was deployed aboard the U.S.S. Midway and the U.S.S. Hancock. While in the Navy Joe earned his private pilot's license. After leaving the Navy, Joe attended Spartan School of Aviation in Tulsa, OK. While there, he earned a Commercial pilot's license, an Instructor's license, a multi-engine license, and became instrument qualified. Joe's first employment was for Great Western Airlines, flying mail and cargo on nightly runs throughout the Mid-West. He flew Beechcraft 18's, Turbine 18's and Convair 580's. Joe once said "The aircraft at Great Western didn't like me much, but they never hurt me." He then transferred to Tulsa Beechcraft, flying the Beech 58, King Air 100 & 200's as well as Lear Jet 24, 25, 35 and 55 models. During this time, Joe flew a chartered Lear Jet 55 around the world. Joe's career path then took him to Continental Airlines where he achieved the rank of Captain. He flew DC-9's, MD-80's, and B-737's, before retiring in 2005. Regarding his time with Continental, Joe once commented: "Besides carrying passengers and freight, I also burned mass quantities of jet fuel, enjoyed free coffee and Dr. Pepper's and was paid very handsomely to do it." Later Joe began a second career with Air Share Corporation of Kansas City becoming Base Manager at Tulsa where he flew Embraer Phenoms 100's, 300's as well as King Air C90's and 350 models. In 2018 Joe, left Air Share and joined Leidos as a contractor for the Federal Aviation Administration. There he worked as an Aeronautical Information Specialist developing and designing aviation flight approach/departure plates for the National Airspace System. If you have a special memory, or a special story about Joe to share with the family, please post it on Joe Hilley's Facebook page for us. It would be a great blessing to us all. Our thanks for your love and prayers for Joe Hilley Family.

Joe Hilley, 68 died January 2nd, 2021 in Tulsa, Oklahoma. Joe was born April 21st 1952 in Long Beach, California. His family later moved to Lompoc, California where he grew up. He was preceded in death by his parents Frank and Helen Hilley.... View Obituary & Service Information

The family of Joseph Hilley created this Life Tributes page to make it easy to share your memories.

Send flowers to the Hilley family.