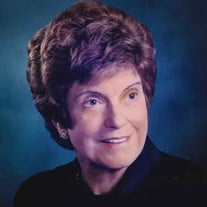 Not sure what to send?

Josephine Grasselli Winter, a mother, philanthropist and supporter of Tulsa society, died of heart disease, on December 30, 2021, at her home near the Philbrook Museum of Art. She was 89. Friendly and energetic, Josie stood out in any crowd, particularly at the Tulsa Symphony Orchestra where she was usually in the center of a group discussing the ensuing performance or planning future performances. She was the patron of the Tulsa Symphony Loft Series. Josie was born on January 18, 1932, in Philadelphia, PA, to Caesar Augustin Grasselli II and Elizabeth Hunkin. She lived in London, England from 1935 - 1939. While her father closed the du Pont offices in Germany, Josie and her mother fled to the United States on the last passenger ship out of England, which zig-zagged across the North Atlantic to avoid the attacks by German U Boats. She and her family moved to Wilmington, Delaware, in 1940.Josie Grasselli attended the Madeira School in McLeod, Virginia, and graduated, in 1949. She spent her college years at Vassar College in New York and Saint Andrews in Scotland, and received her BA from Vassar, in 1953. In an era where few women moved into professional careers, Josie Winter started her career as an Intelligence Analyst for the US Government in Washington D.C. Her work for the US Government took Josie to numerous Middle East countries including Egypt, Iran, Lebanon and Syria. Josie entertained her children with many stories of her adventures in the Middle East. During this period, she led a wonderful social life in Washington where she enjoyed planning the Bachelor and Spinster Ball. In 1959, Josie turned her attention and the expertise she had acquired to work for NBC News. During her three years working as a research assistant manager for NBC News in Washington D.C., Josie met the love of her life, Thomas Greeley Winter. Josie and Tom were married in Wilmington, Delaware on June 3, 1960. Josie gave birth to her first two children in Washington D.C., Thomas Augustin Winter and Frank Cedric Winter II. On June 3rd 1963, the family moved to Stillwater, Oklahoma, where Josie's husband Tom eventually became the head of the Physics Department for Oklahoma State University. In Stillwater, she gave birth to two more children, William Hunkin Winter and Clare McGowin Winter. The Winter family moved to Tulsa in 1971, where Tom Winter became Chairman of the Physics department at the University of Tulsa. The family grew up happily as members of the Tulsa Tennis Club. Josie was a great supporter of the ASCPA, the Oklahoma Heart Fund, the Junior League of Tulsa, The Holland Hall Book and Art Fair and recruiter in the mid-west region for Vassar College. Josie spent decades serving as a volunteer on boards of a variety of organizations including Planned Parenthood, South Kent School, and the Telluride Chamber Music Festival, but her most important work was for her beloved Tulsa Symphony. Josie Winter had a second home in Telluride, Colorado where she donated her time to numerous causes, hiked, skied and vacationed with her loving family. Josie is survived by her son, Thomas Winter and his three daughters, Emilie, Samira and Victoria; her second son, Frank and his wife, Jennifer and their daughter Gizelle; and her beloved daughter, Clare Winter and her children, Josie and Scott. A public funeral will be held at 2:00 pm, Saturday, January 22, 2022, at Trinity Episcopal Church, 501 Cincinnati Avenue, Tulsa, Oklahoma, 74114. Please honor Josie with memorial donations to the ASPCA or the Tulsa Symphony Orchestra. Fitzgerald Ivy Chapel, 918-585-1151

Josephine Grasselli Winter, a mother, philanthropist and supporter of Tulsa society, died of heart disease, on December 30, 2021, at her home near the Philbrook Museum of Art. She was 89. Friendly and energetic, Josie stood out in any crowd,... View Obituary & Service Information

The family of Josephine Grasselli Winter created this Life Tributes page to make it easy to share your memories.