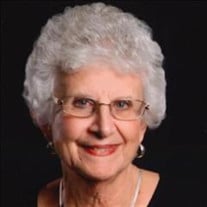 Judith Ann Miller, 84, passed away on May 18th, 2021 at St. Francis Hospital in Tulsa, Oklahoma. She was born on August 19th, 1936 in Chillicothe, Ohio to Chris and Viola Stocklin. Judy grew up in Chillicothe, Ohio and at the early age of 14, was presented the American Legion Award while attending St. Peter's Catholic School, in recognition for her Leadership in Scholastic Abilities. She graduated from Chillicothe High School as Salutatorian in the top of her class in 1954, was then awarded a Freshman Scholarship to the Ohio University in Athens, Ohio for her scholastic achievement. She graduated Summa Cum Laude with Bachelor of Science Degree in education June of 1963. Judy taught 1st grade in Chillicothe, Ohio until 1971, after relocating her family to Tulsa, taught 3rd Grade at Central Elementary in Sand Springs. During this time, Judy earned her Master of Science Degree in Library Science from OSU, in 1981. Judy then established her first Elementary Library at Angus Valley Elementary before returning to Sand Springs Central Elementary to establish the library program there. During Judy's next ten years as librarian, she created and coordinated the Sand Springs Gifted Program. Judy clearly loved teaching and having an impact on young lives. She was installed in Phi Delta Kappa in 1983, a professional fraternity for her leadership and skill in education. Judy later returned to college for an Administrative Certificate and became principal at Twin Cities Elementary of Sand Springs Schools in 1993. Judy retired in 1998 after a 37 year career in education. Judy was also quite involved in serving her community, as an Officer and President of the Sands Springs Education Association, chairing their legislative committee. She was instrumental in several state efforts including, assisting with teacher's pay and retirement legislation, House Bill 1017. Even then, she continued serving our local youth, running several scholarships programs for the Diocese of Tulsa and the Oklahoma Retired Teachers. On May 21st, 2002 Judy was selected as a VIP in the Retired Teachers Association of Oklahoma. After retirement Judy served as President of the St. Francis Auxiliary, a Pink Lady, and volunteer in the Surgery Family Waiting Room, earning recognition as a Lifetime Member at St. Francis. Judy's children are proud of the memories and hundreds thank you letters from students sharing their gratitude for how Judy touched them, taught them, or loved them over the years. Judy's heart for serving began long ago with her start at St. Peter's in Chillicothe, OH in the parish Judy grew up with. It was badly damaged in a fire in 1947, then replaced with the new Parish on April 4th of 1950. Even at age 14, she was assisting wherever and whoever she could. And according to her children and grandchildren, she continued throughout her life giving her best and bringing out the best in others. Her optimism, attitude, and faith influenced her family, students, and community to always strive for excellence. She exuded love, kindness, servanthood, and adventure. Judy was a member at St. Pius Catholic Church in Tulsa, where she served as an Extraordinary Minister of Holy Communion, served eight years as a either Member or President of the St. Pius X School Board, four years on the Holy Family Cathedral School Board, and Minister of Homebound Elderly for 15 years. Judy was also certified at St. Pius in Doctrinal Teachings of the Church in 1974. There has never been, in Judy's entire life, a single week go by, where Judy was not serving someone, somewhere, praying each night, and again each morning, for each of her children, her grandchildren and family and friends. Judy had a gift of making everyone feel special, like they were her favorite, and always with her full attention. Judith Ann Miller was quite a lady, quite a mom, quite a grandmother and quite a good citizen of Tulsa. Those that knew her, knew how lucky they were to have had her in their lives. Judy married John Richard Miller in 1953 in Chillicothe, Ohio and together they had 6 children. Judy was preceded in death by Chris and Viola Stocklin (parents), Eric, Charlie, and Robert Stocklin (brothers), John Richard Miller (husband), Scott David Miller (son), Clarence "Ching" Cottrill (son-in-law), and Judy Lambert (granddaughter). Judy is survived by her sister Sarah and husband Dick Callahan and her children Carol Cottrill, John Chris and wife Gracie Miller, Don and wife Gretchen Miller, Mark and wife Patti Miller, Beth and husband Ed Crone, 15 grandchildren, 21 great grandchildren, and 4 great-great grandchildren with more on the way. A memorial mass will be held at St. Pius X Catholic Church, 1727 S. 75th E. Ave, Tulsa, OK 74112, at 11:00 AM on Thursday, May 27th, 2021. Visitation will begin at 9:00 AM followed by a Rosary at 10:00 AM with visitation concluding at 10:45 AM. Burial will follow at Calvary Cemetery and a reception will be held, following the burial at Integrity Transportation, 3636 W. 61st Street, Tulsa, OK 74132.

Judith Ann Miller, 84, passed away on May 18th, 2021 at St. Francis Hospital in Tulsa, Oklahoma. She was born on August 19th, 1936 in Chillicothe, Ohio to Chris and Viola Stocklin. Judy grew up in Chillicothe, Ohio and at the early age of 14,... View Obituary & Service Information

The family of Judith Ann Miller created this Life Tributes page to make it easy to share your memories.

Send flowers to the Miller family.