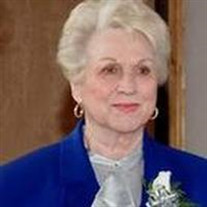 June Marie Gordon passed into eternity on January 3, 2010. She was born in Waldron, Arkansas on June 11, 1931 to Ben Taylor and Alta Marie Bowen. She was raised in Sapulpa, Oklahoma and graduated high school there. Later, she attended Central State College in Edmond, Oklahoma. Throughout her life she demonstrated love and compassion to all who knew her. Her home was always warm and inviting and all family members looked up to her as the Matriarch. Throughout her years of service to American Airlines, she was highly esteemed for her integrity and work ethic. She retired in 1987 and enjoyed traveling, spending time with family and playing bridge with her many wonderful friends. Tirelessly, she served others, by delivering Meals on Wheels, volunteering at St. Francis Hospital Auxiliary in Broken Arrow. As a breast cancer survivor, she was instrumental in facilitating support groups at St. John Hospital. A devoted Catholic, June volunteered for many years at St. Thomas More Catholic Church serving as a Eucharistic Minister and also assisting in the Parish Office. She is survived by two daughters, Rhonda Hall (Charles), Deborah Benshoof (Douglas) and grandchildren, Tiffany, Jamie, Charles, John, Ben and Veronica, 5 great grandchildren, a brother Michael Bowen (Paulette), sister Alma Jamison, nephews and her beloved furry companions, Matt and Coco. Funeral arrangements are with Fitzgerald’s Southwood Colonial Chapel 3612 E. 91st Street in Tulsa. The family will receive friends from 6:00 -8:00p.m. Tuesday, January 5, 2010 at the funeral home and A Mass of Resurrection will be celebrated on Thursday, January 7, 2010 at 10:00 a.m. in All Saints Anglican Cathedral, 4040 E. 91st Street, Tulsa, Oklahoma by the Right Reverend Frederick G. Morrison, Bishop Ordinary. Following Mass, a reception will be held in the parish Hall. In lieu of flowers, those who wish, may make a memorial contribution in her name to All Saints Anglican Cathedral. Fitzgerald Southwood Colonial Chapel, 918-291-3500. www.southwoodcolonialchapel.com

June Marie Gordon passed into eternity on January 3, 2010. She was born in Waldron, Arkansas on June 11, 1931 to Ben Taylor and Alta Marie Bowen. She was raised in Sapulpa, Oklahoma and graduated high school there. Later, she attended Central... View Obituary & Service Information

The family of June Marie Gordon created this Life Tributes page to make it easy to share your memories.

Send flowers to the Gordon family.