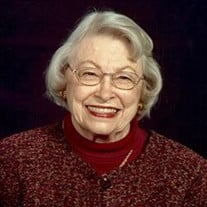 Katherine "Kay" DuVall McKelvey, 95, died peacefully on Friday, March 27, 2020, at her home in Tulsa. Kay was born on July 13, 1924, in Greeley, Colorado, to Joseph Thomas and Clara E. DuVall Blackburn. The family moved back to Miami, Oklahoma and then later Welch, Oklahoma, where her family made their home in what was once the DuVall Hotel, built by her family before Oklahoma statehood. She graduated from Welch High School where, as a child, she was given the honor of choosing the mascot for Welch schools where her father was the principal. Kay chose the Welch Wildcats. After graduation she and her sister Lee Ann worked at the Agricultural Office in Vinita, Oklahoma. Kay then went on to attend and graduate from Draughons Business Institute. She worked for Standard Oil & Gas Research and later Nelson Electric. Kay met her future husband while attending the Catholic Activities group for young adults. Bud and Kay married in 1950. After lovingly raising her seven children to school age, she returned to work as the bookkeeper at the School of St. Mary and eventually retired as Engineering and Sales Secretary from Rosemount Inc. In her retirement she volunteered many hours with Meals on Wheels. Mother blessed us with the gifts of faith, family and a love of the outdoors. She loved gardening, photography and had many artistic talents and hobbies. A devout Catholic she passed on the beliefs and rituals of our Catholic faith. She and our father, Bud, were among the founding members of the Church of St. Mary. Mother was a devout participant in adoration at the St. John's Chapel. She formed the St. Mary's C�nacle group, was active in the Marian Movement of Priests, Legion of Mary and many other groups. Besides her faith, her family was her most prized possession. Kay was preceded in death by her husband of 66 years, Lawrence Neil "Bud" McKelvey, her son, Larry, her parents, her twin brother J. T. Blackburn, Jr, sister, Lee Ann Novelli, and brother, Robert Blackburn. She is survived by her son, Jerry McKelvey & wife Elizabeth; daughters, Theresa McMahon & husband Bryan, Kathy McKelvey, Laurie McKelvey, Margie Callahan & husband Steve, Loretta Stutsman & husband John, sister Janet Dorris, and brother Michael Blackburn. Mother was a proud grandmother of 12 grandchildren and 13 great-grandchildren. A Mass of Christian Burial will be celebrated at the Church of St. Mary in Tulsa on Friday, June 5, 2020 at 11:00 a.m. A rosary will be held before the Funeral Mass on Friday, June 5, 2020 at 10:30 a.m. In lieu of flowers, donations may be sent to Catholic Charities of Eastern Oklahoma. Fitzgerald Southwood Colonial Chapel, 918-291-3500.

The family of Katherine DuVall McKelvey created this Life Tributes page to make it easy to share your memories.

Send flowers to the McKelvey family.