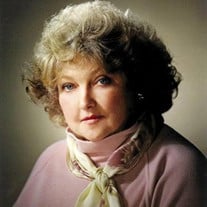 Kitty Roberts joined her brothers Danny and Jimmy and her parents in heaven on April 17, 2020 in Tulsa, Oklahoma. The oldest and only daughter to Harold and Martha Holmes Roberts, Kitty was Indianapolis born and "nun-educated" and grew up in a "good Catholic home" with four younger brothers, a musician mother and a father whose contracting job brought the family, by way of Kansas City, to the Tulsa area in the '60s. Self-expression wasn't bridled in Kitty's upbringing-a large, loving family, headed by a now deceased 106-year-old matriarch, was always supportive of both her strong personality and exhibitive character. In Indianapolis, Kitty attended St. Anthony Grade School and St. Agnes Academy and Bishop McGuiness High School in Oklahoma City. In 1968, Kitty graduated from the University of Tulsa with a degree in Journalism and Theatre. After college, she worked as a radio newswoman and later became a "pioneering woman" in the field of broadcast management when she was named News and Operations director for KMOD & KXXO Radio. While working in radio, she and fellow actors joined together to create the Living Arts Theater, which would later become the American Theater Company, the theatrical jewel of the Tulsa community. Kitty's passion and boundless vision drove her to become the driving force of live theatre in Tulsa. Her positive impact on the community touched and influenced many lives over her 50 years of dedication as an actor and director. She fostered cultural change, pioneered arts education outreach, and broke new ground for women in leadership roles in the arts. As the Managing Artistic Director of the American Theatre Company, she was responsible for the production of more than 300 shows and directed and appeared in 21. Kitty was a member of The Theatre Communications Group. She served on the Oklahoma Arts Council Theatre Advisory Panel, as a Theatre Evaluator for the National Endowment for the Arts, was a member of Alpha Epsilon Rho, Sigma Delta Chi, Theta Alpha Phi, Women in Communications and Women in Radio & Television. She was named one of the three outstanding women in Oklahoma in 1979 by Women in Communications and recognized as Special Assistant to the Governor in 1987. She was the sole Tulsa Honoree of the 2009 Governor's Arts Award presented by the OAC and recipient of the Pinnacle Award in the Arts in 1992 for the many years she served on the OAC Theatre Advisory Panel. She served on the Tulsa Performing Art Center Board of Trustees, and in 2013 received the Mary Kay Place Award for Theatre Excellence. She is proceeded in death by her parents Harold and Martha and brothers Daniel and James Roberts. Survivors include: brothers Tom (Yuki) Roberts & John (Debbie) Roberts; sister in law Linda Roberts; nephews Christopher Roberts, Ryan (Chelcy) Roberts and their children Ellie and Rowan, Sean (Erin) Roberts, and Stephen (Maddie) Spence; and nieces Jessica Spence and Morgan Roberts. Kitty's family would like to thank all of those who cared for her near the end of her life. A private family ceremony will be held now, and a gathering to celebrate the life of this wonderful person will be held at a later date. In lieu of flowers, the family asks you to support Kitty's life's work, the American Theatre Company at 308 S. Lansing Ave. Tulsa, Ok. 74123 with contributions in her name. Southwood Colonial Chapel, 918-299-3500

Kitty Roberts joined her brothers Danny and Jimmy and her parents in heaven on April 17, 2020 in Tulsa, Oklahoma. The oldest and only daughter to Harold and Martha Holmes Roberts, Kitty was Indianapolis born and "nun-educated" and grew up in... View Obituary & Service Information

The family of Katherine Mae Roberts created this Life Tributes page to make it easy to share your memories.

Kitty Roberts joined her brothers Danny and Jimmy and her parents...

Send flowers to the Roberts family.