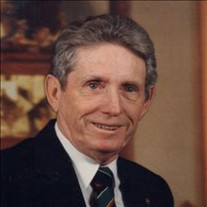 Kenneth Ray McCulloch passed peacefully in his sleep on Tuesday, January 18, at his home surrounded by his loving family. He was born in Lebanon, Missouri on June 10, 1926. He was the second of 8 children. He graduated from Lebanon High School in 1944 and enlisted directly in the Army. He served as a Master Sergeant in Korea after brief duties at the end of WWII, returning home to Missouri in 1954. Ken met his future wife, Della Kay, when she was visiting his family home with her brother, who was courting his sister. Ken and Della were married in May of 1955. They moved to Wichita, Kansas, where their first child was born. As a sales manager for Fuller Brush Company, Ken moved the family several times over the next 7 years from Wichita to Parsons, KS, and then to Oklahoma City, finally landing in Tulsa where they remained the rest of their lives. Ken obtained his Real Estate license and as they say, the rest is history. After becoming a Realtor and builder in Tulsa, he turned his attention to the growing community of Glenpool. He became instrumental in helping the little town grow and prosper. He built houses and multi-family dwellings and helped to make many improvements to enhance the main entrance into town. He was passionately involved in the Veterans of Foreign Wars Glenpool Post #1327. He was a member of the VFW Honor Guard, and acknowledged over 2000 brothers-in-arms with The 21 Gun Salute. He helped to establish The Black Gold Days Festival, and he also helped to build the Community Center. Ken was awarded the Lifetime Achievement Award for his service to the community in January of 1996. He truly enjoyed his projects in Glenpool. Ken loved to garden and took great pride in his yard. After he retired, he spent several years being resident Grandpa and general handyman at The First Edition Bookshop, owned by his wife, Della. He remained active in the VFW as long as he was able. We were fortunate to have such a energetic, colorful, and generous patriarch, One was never too old to hear him say to you, 'Well, hello, Sweetheart!' Ken was preceded in death by all of his siblings, and his wife of 66 years, Della. He is survived by his children: John (Marilyn), James (Stephanie), Paul (Janet), Marc, Ellin Henderson (David), and Dan (Debbie), as well as 16 grandchildren, 9 great grandchildren, and numerous nieces and nephews, all of whom he loved tremendously. As his final act of service, he donated his body to OU Medical School. There will be a graveside service at a later date. We are hosting a Celebration of Life for friends and family on Saturday May 28 at 2:00 PM at the family home. Fitzgerald Ivy Chapel, 918-585-1151

Kenneth Ray McCulloch passed peacefully in his sleep on Tuesday, January 18, at his home surrounded by his loving family. He was born in Lebanon, Missouri on June 10, 1926. He was the second of 8 children. He graduated from Lebanon High School... View Obituary & Service Information

The family of Kenneth Ray McCulloch created this Life Tributes page to make it easy to share your memories.

Kenneth Ray McCulloch passed peacefully in his sleep on Tuesday,...

Send flowers to the McCulloch family.