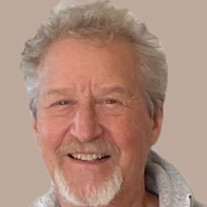 TULSA, OKLAHOMA Larry Altshuler, loving husband of Claudia Altshuler and father to Lindsey, Genevieve, Ben and Vanessa, was born in Oklahoma City, Oklahoma on August 3,1950 to Jerome and Roselyne (Weitzenhoffer) Altshuler and peacefully left this world at home on November 24, 2021 in Tulsa, Oklahoma surrounded by his family. Larry lived most of his life in Oklahoma City where he attended John Marshall High School, excelling in academics and tennis. He graduated from Duke University with a degree in psychology, then attended the University of Oklahoma graduating with a Medical Degree in Internal Medicine. Larry practiced in the Oklahoma City area, then had his children Genevieve Renee and Vanessa Lauren in the early 1980's. He met Claudia (Erhardt) Altshuler and her children Lindsey and Benjamin in 1988; they married and combined families in 1989. Edmond became their new home for 20 years where they raised their family and created a happy life of work, play and adventure. While raising the family, Larry established Balanced Healing Medical Center in Oklahoma City. Because of his passion for helping patients look "outside the box" when dealing with health issues, he wrote multiple books and was a frequent lecturer in the community and nationally for the general public and professional organizations. His Balanced Healing book published in 2004 won a national book award as he toured and lectured throughout the United States. From 2008 to 2018, Larry worked as an Internist, Hospitalist and Director of Intake in Tulsa at Cancer Treatment Centers of America. He was a caring, understanding physician who excelled in helping patients with both conventional and alternative therapies for healing. During his years in Tulsa, Larry was in continual motion with his love of being with family and friends, travel, writing books, lecturing, public speaking, tennis, golf, collecting art, playing the piano, making ceramics, OU football and Duke basketball. In retirement, Larry continued living fully while going between a home in Mount Dora, Florida and Tulsa, Oklahoma. He is survived by his wife, Claudia of Tulsa, Oklahoma; his children, Lindsey (Jordan) Helmerich of Tulsa, Oklahoma, Genevieve (Justin) Eskridge of Tulsa, Oklahoma, Benjamin (Chelsea Trello) Erhardt of Edmond, Oklahoma, Vanessa Altshuler Gamble of Los Angeles, California; his grandchildren, Claire Anderson, Ava Helmerich and Elijah Helmerich of Tulsa, Isla Erhardt and Saylor Trello-Schartz of Edmond. Additional survivors include his brothers, Michael (Patty) Altshuler, Kenneth (Lynda Doyle) Altshuler; mother-in-law, Paula Fickel; sisters-in-law, Karla (Bill) Beaman and Andrea Gorman, as well as many beloved nieces and nephews and dear friends. Larry was preceded in death by his parents, Jerry and Roselyne Altshuler. A private memorial service facilitated by Fitzgerald Ivy Chapel is being held for the family with a Celebration of Life in 2022. In lieu of flowers, charitable donations may be made in his honor to the Oklahoma Medical Research Foundation, www.omrf.org, of which he was a Fleming Scholar; Tulsa Up with Trees, www.upwithtrees.org; or to the charity of your choice. Fitzgerald Ivy Chapel, 918-585-1151

The family of Laurence Henry Altshuler created this Life Tributes page to make it easy to share your memories.

Send flowers to the Altshuler family.