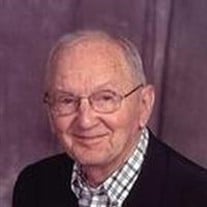 Williams, Lawrence E. “Eddie” died Saturday, February 14, 2009 in Tulsa. He was born November 17, 1924 in Henryetta, OK to James Elmer and Frances Agnes Lamer Williams. He served in the U.S. Army during World War II and fought in the Battle of the Bulge. He was a graduate of OSU. Eddie was retired from Chevron Chemical Co. in sales after 36 years. He was preceded in death by his parents and daughter Christine Hand. He is survived by wife of 59 years, Jean Stevenson Williams of Tulsa, sons; Steven J. and wife Susan Williams of Tulsa and Lawrence E. “Larry” Williams, Jr. and wife Hannah of Conroe, TX; daughter, Melissa Ann and husband Bryan Hermick of Naperville, IL. 3 brothers; Hamil Williams of Henryetta, OK, Gene Williams of Okmulgee OK , and Neil Williams, of Blackwell, OK; sister, Ella Mae Salley of Arvada, CO. 14 grandchildren and 4 great grandchildren. Family will receive friends from 3:30 – 5:30 p.m. and a rosary will be said at 7:00 p.m. Wednesday February 18, 2009 both at Fitzgerald Southwood Colonial Chapel and a Mass of Christian Burial will be celebrated 10:30 a.m. Thursday February 19, 2009 at St. Bernard of Clairvaux Church. Family request memorials may be made to Las Manos de Christine (The Hands of Christine), a family founded organization to educate the poorest children in Guatemala. Donations may be sent to: 824 Canterbury Arc, Las Cruces, NM 88005. Fitzgerald Southwood Colonial Chapel 291-3500.

The family of Lawrence E. "Eddie" Williams created this Life Tributes page to make it easy to share your memories.