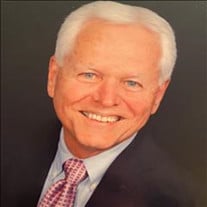 Larry H. Wewers was born on December 23, 1941 in Fort Smith, Arkansas and died on September 1, 2020, the beloved day he was welcomed into the heavenly kingdom by his savior, Jesus Christ. Larry was preceded in death by his father, Paul Wewers and his mother, Rose Roll. Larry attended St. Boniface Grade School in Fort Smith, Arkansas, then attended Westark Community College and on to the University of Arkansas graduating with a degree in Industrial Management in 1966. In 1966, Larry married Paula Renfrow and they had a daughter, Leigh Allison Wewers, who was the light of his life. In 1989, Larry married Linda Wewers, which blessed him as a stepfather to Randy Hayes, Brad Hayes and Deedra Determan for the next 30 years. Larry worked at Conoco Pipeline for 22 years and then became an entrepreneur starting W.E. & Associates, a pipeline consulting company where he worked for 34 years. Larry was an active businessman in the community as a member of Leadership Tulsa, Leadership Jenks, United Way, President of the Subiaco Alumni Association, President of Tulsa Pipeliner's Club, Planning Commission for City of Jenks, and the Knights of Columbus. When Larry retired from his consulting company, his first goal was to complete the Master Gardner Certification. He had been a master gardener his whole life, but this made it official. He loved to garden with his wife and had some of the best produce around! His other love of retirement was volunteering at Porta Caeli House with the love of his life, Linda. Larry was a devout member of Church of St. Mary Catholic Church and served as Lector and Eucharistic Minister. Previously he was a member at St. Pius X Catholic Church, St. Benedicts Catholic Church and St. Ann's Catholic Church. In 1986, Larry accepted Jesus Christ as his personal savior and spent the remainder of his life growing in that relationship through love and bible study. He was a member of Bible Study Fellowship (BSF) for 33 years and most recently very devoted to his Small Group of men's bible study at Church of St. Mary. When he got Leukemia in 2019, he told God if he lived out his mission, he would be able to bring others to a personal relationship with Jesus Christ. And he did that to the very end, getting his doctors to pray with him in the hospital and sharing his testimony with everyone he met. Larry is survived by his wife Linda Wewers of Jenks, OK, twin brother Rev. William Wewers, O.S.B. of Clarksville, AR, Brother Raymond Wewers (Barbara) of Russellville, AR, Sister Theresa Beockholder (Bill) of Mountain Home, AR, Daughter Leigh Berryhill (Leonard) of Talala, OK, Stepson Randy Hayes (Jennifer) of Broken Arrow, OK, Stepson Brad Hayes of Frisco, TX, Stepdaughter Deedra Determan (Jarrett) of Tulsa, OK, Grandsons Thompson Berryhill, Jace Determan, Granddaughters Avery Determan and Harper Hayes. The Rosary will be at Holy Family Cathedral at 122 W. 8th Street in Tulsa on Thursday, September 3 at 7pm. Funeral mass will be held at the Church of St. Mary on Friday, September 4 at 11am located at 1347 East 49th Place in Tulsa. In lieu of flowers, the family requests for donations to be made to Porta Caeli House, where Larry volunteered for the last few years. Romans 14:7-9 Life and death are both in God's hands. ... For if we live, we live for the Lord, and if we die, we die for the Lord; so then, whether we live or die, we are the Lord's."

Larry H. Wewers was born on December 23, 1941 in Fort Smith, Arkansas and died on September 1, 2020, the beloved day he was welcomed into the heavenly kingdom by his savior, Jesus Christ. Larry was preceded in death by his father, Paul Wewers... View Obituary & Service Information

The family of Larry H. Wewers created this Life Tributes page to make it easy to share your memories.

Send flowers to the Wewers family.