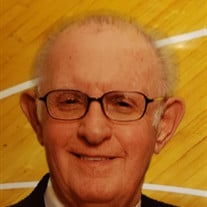 Leonard C. Morton passed away at 2:20pm on Monday, November 2nd, 2020. His 91 years began in Oklahoma City on June 14th, 1929. Leonard was raised in Altus, Oklahoma. His bout with childhood asthma led him to move to California and stay with his grandparents for one year. He spent one year of high school at New Mexico Military Institute. Later at the University of Oklahoma, Leonard met the love of his life, Esther Shera Perlman. They became life-long Sooner supporters. Len loved and embraced his Judaism. He and Esther enjoyed their membership with Temple Israel for more than 60 years. Leonard adored his family and enjoyed watching his sons and grandchildren compete in basketball, baseball, football and tennis. Sports was a huge part of his life as he began his broadcasting career while still a teenager. After graduating from OU and a short stint in Lawton where the both boys were born, Leonard moved his family to Tulsa and became Sports Director at KVOO TV/Radio in 1956. Interviewing Hall of Fame OU football coach Bud Wilkinson was an early gift. Interviews with Willie Mays and Mickey Mantle ensued. Len was featured on the Today Show in New York, as the college football prognosticator of the week, where he correctly predicted the outcome of all five games he picked. An exceptional play-by-play sports broadcaster, Leo announced TU football and basketball from 1959-71 and also the Golden Hurricane's baseball games during their College World Series seasons in �69 and �71. His broadcasts could be heard across much of the United States during that time on 50,000-watt, clear-channel KVOO. Morton also was the primary radio voice of baseball's Tulsa Oilers from 1962-73 which included players like Walt "No-Neck" Williams, Joe "Speedo" Patterson, Hall of Famers, Steve Carlton, Ted Simmons, Keith Hernandez and Mike Torres, to name a few. His broadcast partners included Mack Creager, Jack Campbell and Hall of Famers Pepper Martin and Warren Spahn. In 1992, Morton was selected as the winner of the fourth annual Tulsa Sportscasters Association's Career Achievement Award. Leonard is predeceased by his loving younger sister, Doris Levine, and his parents, Esther and Norman Cohen. He is survived by: his loving wife of 67 years, Esther Shera Morton; and sons, Bruce Morton of Tulsa, and Marc Morton and his wife Sandi Morton, of Las Vegas, Nevada; and grandchildren, Joshua Case Morton, Alexander Marc Morton, Brock Steven Morton and his special granddaughter Madison "Maddie" Morton. In lieu of flowers, please consider a donation to: Kaiser Health Care Center at Zarrow Pointe, 2025 E. 71st Street Tulsa, OK 74136. Fitzgerald Ivy Chapel, 918-585-1151

Leonard C. Morton passed away at 2:20pm on Monday, November 2nd, 2020. His 91 years began in Oklahoma City on June 14th, 1929. Leonard was raised in Altus, Oklahoma. His bout with childhood asthma led him to move to California and stay with... View Obituary & Service Information

The family of Leonard Cohen Morton created this Life Tributes page to make it easy to share your memories.

Send flowers to the Morton family.