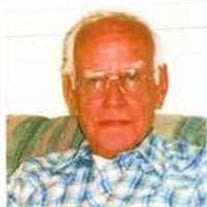 Loyd Clyde Huskey, age 83 of Owasso formally of Tulsa, passed away on Tuesday, May 4, 2010 at his home. Loyd was born on December 6, 1926 in Blackburn, Oklahoma to Clyde and Nettie (Roe) Huskey. He attended school in a Blackburn school house and enlisted at age sixteen in the United States Navy during World War II. After the service Loyd married Roberta Greer on November 10, 1947 in Tulsa. He began working for American Airlines and retired on January 31, 1982 with twenty-six years working as both a Machinist then an Inspector. He was a member of the American Legion,Veterans of Foreign Wars post #5307 and the Lions club were Loyd volunteered many hours. He helped with funeral honor guard and also put American flags out in Salina, Oklahoma. He and Roberta gathered eye glasses for the Lions club. Loyd enjoyed working on cars, going camping, he was an avid fisherman, enjoyed square dancing, gardening at the lake house and being with the grandchildren and great grandchildren. Loyd is survived by his wife of sixty-two years Roberta Huskey of the home, three daughters Karen Moody and husband Wayne of Claremore, Sandy Ruckman and husband Frank of Tulsa and Sheila Cannon and husband Tom of Collinsville, two sisters Delores Clark of Hominy and Darlene Buck and husband Pat of Emporia, Kansas, also six grandchildren and thirteen great-grandchildren. He was preceded in death by parents, three brothers Bob,Lonnie Ray and W.C.Huskey and a sister Jeannie Howell. Graveside Funeral services will be held on Friday, 11:00 a.m., May 7, 2010, at the Howard J. Powell Cemetery in Hominy, Oklahoma, with Fred Waldrep Officiating. Online memorials may be left for the family at www.fitzgeraldivychapel.com Arrangements have been entrusted to the care of Fitzgerald Ivy Chapel of Tulsa.

Loyd Clyde Huskey, age 83 of Owasso formally of Tulsa, passed away on Tuesday, May 4, 2010 at his home. Loyd was born on December 6, 1926 in Blackburn, Oklahoma to Clyde and Nettie (Roe) Huskey. He attended school in a Blackburn school house... View Obituary & Service Information

The family of Loyd Clyde Huskey created this Life Tributes page to make it easy to share your memories.

Send flowers to the Huskey family.